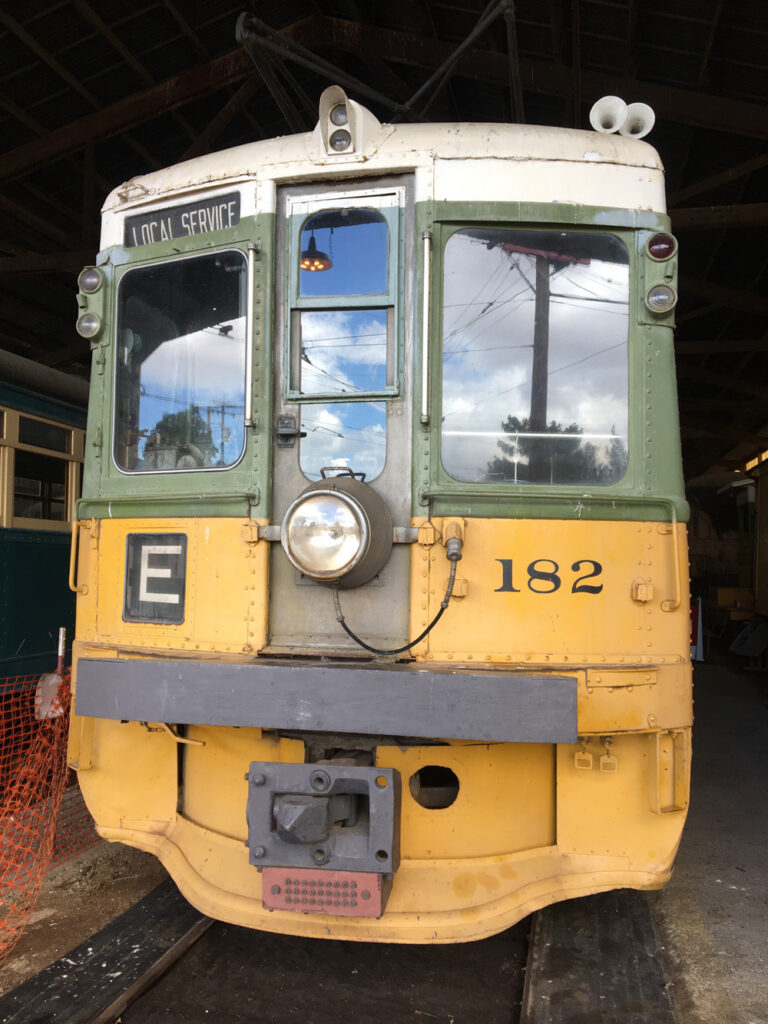 The riders now are mostly kids and families visiting a trackside pumpkin patch, not commuters headed to jobs in San Francisco. You can hear an echo of rush hour, though.

“That’s the time of year we really move people, instead of just offer a scenic train ride, and those cars hold 130 people each, plus standees,” said Bob Towar, volunteer, treasurer and spokesperson for the Bay Area Electric Railroad Association. “They run every 30 minutes. And they’re full. We have some days that approach 1,000 visitors.”

The two-car, articulated, three-truck units were built in 1937 by Bethlehem Shipyard in Wilmington, Del., for service across the San Francisco Bay Bridge. They had cab signals and train stop equipment, and they were designed to help riders get on and off quickly.

The museum’s home is rural Rio Vista Junction, where state Highway 12 crosses over the former Sacramento Northern Railway mainline about 60 miles northeast of San Francisco. The association acquired 22 miles of the former SN from the Union Pacific in 1993. Most of it is idle, but the museum offers rides year-round on approximately 6 miles of re-electrified track south from the museum.

The trip to the Pumpkin Patch Festival at Gum Grove, accessible only by rail, is about 5 miles each way.

This year’s pumpkin trains operate on the last three weekends in October. They will run every 30 to 45 minutes between the museum and the patch, with trains leaving the museum between 10 a.m. and 3:30 p.m. The museum will be open from 9 a.m. to 5 p.m.

“It’s our largest fundraising event of the year,” Towar said. “We partner with local Rotary Club chapters, and the event brings significant revenue to both organizations.”

The association owns bridge units 182, 186, and 187. The pumpkin patch trains use 182 and 187; unit 186 is stored and would need significant work to return to service, Towar said. The museum also has three Key System streetcars, “one of which is in the process of complete restoration in our shop,” he said. Another, No. 352, “is a workhorse and runs often.”

On warm days, doing what Key System operators did

The museum assigns other cars to the pumpkin trains as needed and runs the bridge units at other times of the year, Towar said, especially on busy days.

The cars’ windows don’t open, so the museum tries not to use the units during hot weather. But on warm days in October, “we do what Key System operators used to do,” he said. “Open the door at each end of the car and get a breeze going through as the car runs.

“I love running the bridge units,” Towar added. “I don’t need much of a reason to pull one out when I am operating for the day.”

If these features weren’t enough to qualify the bridge units for the pumpkin runs, they have one more attraction: The cars are partly orange.

For more information go to the Events tab on the website or call the museum (707-374-2978) for the latest information on the day you plan to visit, especially if rain is in the forecast.