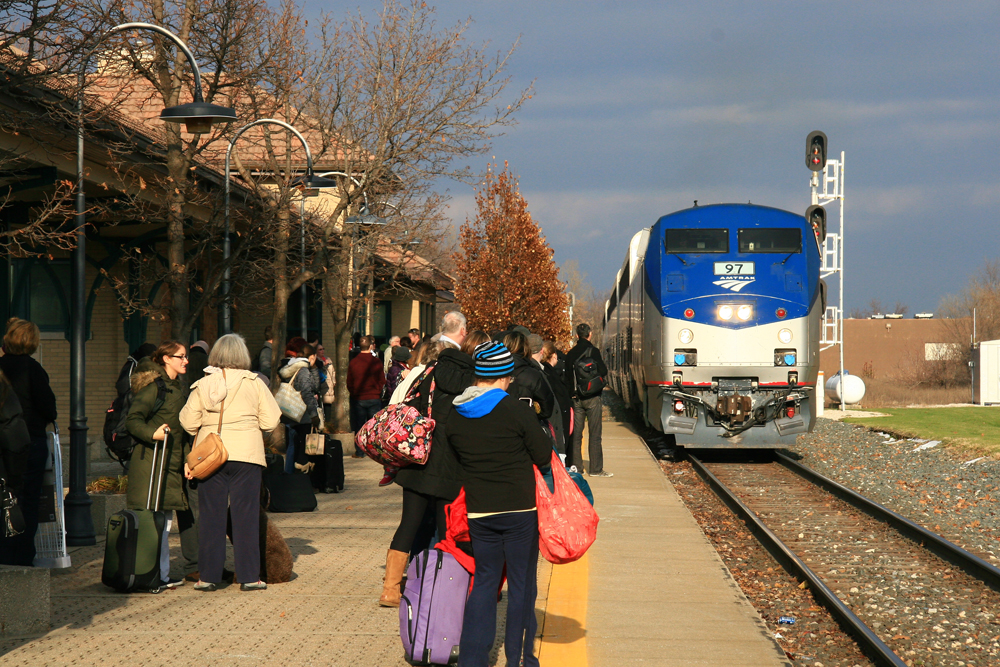 Amtrak trains during the holidays in 2021 are facing ridership demand last seen in 2019 before COVID-19 and a dip in 2020. While autos jam highways where public transportation options are scarce, and airlines offer sufficient capacity to accommodate longer trips, Amtrak in the past has risen to the occasion by offering extra trains and expanded consists on its busiest routes.

Today, meeting such travel-demand spurts is a challenge. The steps Amtrak management took last year to reduce costs by sidelining equipment and furloughing maintenance, onboard, and operating personnel were not sufficiently reversed even when funding was secured early in 2021, leaving the company unprepared to capture revenue.

Another factor is the unexplained unavailability of Siemens’ Venture coaches for California and the Midwest, which were first delivered in August 2020 [see “Digest: First cars in IDOT order …,” Trains News Wire, Aug. 31, 2020] and began testing in the Midwest in January 2021. Some Horizon and Amfleet cars they were meant to replace have been diverted to Amtrak Cascades trains in the Pacific Northwest, subbing for Talgo trainsets, removed from service after the Washington Department of Transportation’s Rail Division declined to renew its Talgo maintanence agreement. To replace the cars that went west, Amfleet II long-distance coaches have migrated to Midwest corridor service, while many East Coast overnight trains that would normally use those cars are operating with fewer coaches.

The capacity crunch could also be exacerbated this year by potential staff shortages tied to employee vaccination status.

In Amtrak’s earliest years, railroads had cars and locomotives that the fledgling company initially declined to acquire, such as legions of heavyweight ex-Pennsylvania Railroad P70 coaches that were routinely pressed into holiday service. After F40 and AEM-7 locomotives, Superliners, and nearly 500 Amfleet I coaches and cafes began arriving by 1980, Amtrak had leftover heritage equipment that could be utilized. But the ranks of these expensive-to-maintain cars eventually thinned. Why pay to keep obsolete rolling stock around only for occasional high-demand peaks?

Meanwhile, computerization and improvements to Amtrak’s reservation system triggered the eventual phasing out of unreserved trains. This development especially impacted travelers on the Northeast Corridor, where the prospect of standing without a seat for hours had become a dreaded Thanksgiving ritual. By the early 2000s, the ability to yield-manage inventory on a train-by-train basis replaced simple “peak” and “off-peak” pricing. The systems also enabled separate fare structures for Metroliners and their Acela successors.

Managing Amtrak trains during the holidays

The biggest crush occurs the Sunday after Thanksgiving, mainly because the people who are home for the holidays may travel there from school or work on different days during the previous week but have to be back on Monday. However, heavy demand also develops on Wednesday of Thanksgiving week.

Finding extra equipment to accommodate demand has been no easy task. Systemwide, this has been accomplished by adjusting maintenance cycles for cars and locomotives so that practically nothing sits in the shop for scheduled maintenance when it could be carrying paying customers. But with a fleet that has not grown appreciably in decades, this stopgap fix can only go so far.

In the Northeast Corridor, Amtrak has leased commuter trainsets from Maryland’s MARC, Philadelphia’s SEPTA, and NJ Transit. The equipment already runs on Amtrak’s own electrified and signaled tracks between Washington, D.C., and New York; most extra trains utilizing these sets are scheduled for Sunday, sprinkling in mid-afternoon and evening round trips from their overnight storage locations with Amfleet-equipped Northeast Regional trains. Because these cars don’t have reclining seats or food service, initial lower fares are generally offered.

Another tactic, both in the East and Midwest, has been to create extra trips on the busiest days by turning crews and equipment faster than they normally would cycle between one regular assignment and another. This also requires coordinating support services such as cleaning and food delivery at special times and locations. Most notable on the Northeast Corridor in recent years has been the deployment of many more Acela round trips over the entire route, adding hundreds of seats at premium fares on the New York-Boston segment.

Additional Amtrak trains during the holidays have been sponsored by the Illinois and Michigan Departments of Transportation and permitted to operate by Norfolk Southern, BNSF Railway, Canadian National, and Union Pacific with the understanding that they are holiday-only incursions on freight business. Schedules are adjusted to get extra turns out of existing equipment, with supplemental round trips to Quincy and Normal, Ill., and Holland and Ann Arbor, Mich. Supplemental car lines have also been added to certain long-distance train departures to provide all-weather access to rural communities and along corridors they traverse without state support.

A crucial component of handling the additional passengers has been annual volunteering by Amtrak managers and office staff who descend on major stations. They help control the crowds and answer questions for travelers who may have purchased a ticket but need help navigating their way to the train. The volunteers know that every personal contact made may mean a satisfied repeat customer when business isn’t nearly as brisk.

Amtrak train sellouts on tap for 2021

Unfortunately for Amtrak and the traveling public, staffing and equipment constraints mean that no supplemental departures had been scheduled this year less than two weeks before the November holiday. Trains.com asked the company for a rundown of adjustments that are being made across the country but has not received a response.

The biggest problem is Sunday, Nov. 28, on routes where demand has traditionally been the heaviest and capacity is most constrained. A few examples of bookings that day, when checked two weeks in advance on November 15:

Empire Corridor: All Sunday Niagara Falls-bound trains are sold out as far as Utica, N.Y. Between New York City and Albany 6 of 9 northbound and 7 of 10 southbound had no seats available.

Chicago: Sellouts on the 28th include all five trains to St. Louis (including the Texas Eagle); all three to Carbondale, Ill.(including the City of New Orleans); all four to Battle Creek, Mich., and long-distance trains in coach to Washington, D.C.; St. Paul, Minn.; Omaha, Neb.; and Kansas City, Mo.

As expected, trains throughout the system are experiencing sellouts, near sellouts, or high fares as inventory disappears before, during, and after Thanksgiving week. Some normally unreserved trains such as the West Coast’s Pacific Surfliners and Philadelphia-Harrisburg, Pa., Keystone Corridor departures are reserved for the period.  And except for Nov. 23-26, the southbound Auto Train has coach seats but no sleeping car accommodations until Dec. 2.

No recounting of holidays past would be complete without acknowledging the immense contribution of strategist Bruce Van Sant. The company’s former Director of System Operations quarterbacked equipment acquisition for extra trains and helped orchestrate the distribution of a finite number of Amfleet, Horizon, and Superliner coaches while keeping an eye on train length and crew turns. Van Sant, who succumbed to cancer in 2017, oversaw the Thanksgiving process for decades.

Part of his daily routine was looking at available inventory across the entire system to spot corridor ridership trends and anticipating future capacity needs, but an August 2011 visit to Bruce’s office at the Consolidated National Operations Center in Wilmington, Del., confirmed the value of his attention to detail.

“If we don’t add a seventh coach to (Northeast Corridor) train 148 on Fridays, we’ll be turning lots of people away, so we have to balance the cost of adding the extra car with the revenue it could bring in,” he said. Van Sant was already looking at the previous year’s Thanksgiving ridership and revenue stats to see how he might fine-tune plans for the upcoming surge of Amtrak trains during the holidays.

There are many dedicated professionals at Amtrak who work to make the most out of the yearly holiday challenge and opportunity with limited resources, but it is hard to replace the institutional knowledge Van Sant brought to the table. It’s something people who benefitted from his expertise will always be thankful for.

3 thoughts on “Amtrak trains during the holidays”