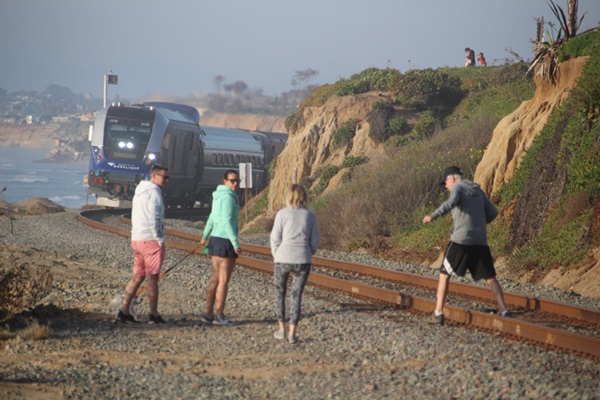 SAN DIEGO, Calif. — The North County Transit District plans to revive its regulatory efforts to build a safety fence along its rail line through Del Mar, Calif., saying it has been unable to reach agreement with the city, which opposes the fencing.

The San Diego Union Tribune reports the district board of directors, at a Nov. 18 meeting, authorized staff to renew the petition filed with the Surface Transportation Board, seeking a ruling that would give the district sole authority over safety and maintenance projects through the Del Mar Bluffs area.

The district first asked the STB to rule on the matter in an August filing [see “Digest: San Diego transit agency seeks STB ruling …,” Trains News Wire, Sept. 15, 2020], but asked the agency to place the matter on hold while it conducted talks with Del Mar and the California Coastal Commission [see “North County Transit District asked STB to delay action …,” News Wire, Nov. 7, 2020]. The delay has been extended at least once while talks continued.

As part of its renewal of the action, the district will ask the STB for an “expedited determination” if no agreement is reached by Dec. 31 with the city and commission.

NCTD Executive Director told the newspaper in an email that his agency has “worked constructively and collaboratively” with Del Mar and the commission to reach a solution, but that it is now time for the other two parties “to do their part to achieve a successful outcome that precludes the need for regulatory action.”

Residents have opposed the proposed chain-link fence because they say it will block access to the bluffs and beach and block ocean views, and are concerned about efforts to stabilize the bluffs, which are subject to landslides. The transit district has offered to lower the fence, use a different design, and move some fencing to decrease the impact on views.