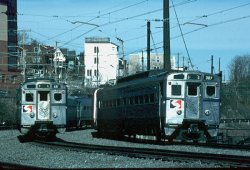 SEPTA’s commuter rail service is operated as its Regional Rail Division. From Center City Philadelphia, trains fan out on 13 routes, covering 223 miles and serving 155 stations in Philadelphia, Bucks, Chester, Delaware, and Montgomery counties, as well as the neighboring states of New Jersey and Delaware. Ridership on SEPTA’s regional rail lines averaged 99,000 trips per day in 2000, with a total of 26.9 million trips recorded for the year.

SEPTA purchased new commuter train equipment in the 1970s, and began subsidizing the suburban passenger services operated by the freight railroads. The April 1976 creation of Conrail brought the Reading and Penn Central (Pennsylvania’s successor) lines under common ownership. As state funding dwindled, services were curtailed. All train service on on-electrified lines was gone by 1982. Conrail divested itself of its northeast commuter operations by the end of 1982, in accordance with the Northeast Rail Service Act of 1981.

On January 1, 1983, SEPTA assumed control of Philadelphia-area commuter rail services. While SEPTA scrambled to piece together labor contracts with 15 rail unions, the trains ran on limited schedules, then were halted altogether during a 108-day strike that began March 15, 1983.

SEPTA is one of only two passenger rail systems in North America that operate exclusively on electric power. (The other is the South Shore in Illinois and Indiana.)

A fleet of 304 electric M.U.s, powered via overhead catenary, forms the backbone of SEPTA’s rolling stock. The cars – nicknamed Silverliners for their fluted stainless steel sides – were built by the Budd Company, St. Louis Car Company, and General Electric in the 1960s and 1970s for the Reading and Penn Central, and have undergone various overhauls since then. In 2006, SEPTA placed an order with Rotem Corp. for 104 “Silverliner V” M.U.s that will be assembled in Philadelphia.

On longer-distance routes, SEPTA also uses push-pull trainsets powered by one ABB Traction ALP44 and seven ASEA-Brown Boveri AEM7 electric locomotives, hauling single-level coaches from Bombardier. In 2000, Penn DOT provided funds for the purchase of additional Bombardier coaches to meet an anticipated increase in service on lines to New Jersey during a reconstruction of Interstate 95.

SEPTA trains run on their own tracks, except for trains operating on ex-Pennsylvania Railroad commuter lines, and the Airport Line, which use portions of Amtrak’s Northeast Corridor or Keystone Corridor for all or part of their routes. In addition, trains on the West Trenton and Fox Chase lines use segments of CSX’s Trenton Line, the former Reading main line between Philadelphia and northern New Jersey.

SEPTA realized a major improvement in operations in November 1984, when it opened the Center City Commuter Tunnel – a four-track, 1.8-mile tunnel beneath Center City Philadelphia. (Conrail had begun the project in 1978.) For the first time, the former Reading and Pennsylvania commuter lines were joined together, allowing better equipment utilization and train scheduling, and providing more travel options for passengers. The tunnel, which cost $325 million, allowed SEPTA trains on ex-Reading routes to operate directly into the previously stub-ended ex-PRR Suburban Station. One casualty of the tunnel’s opening was the cessation of train service beneath the giant trainshed of Reading Terminal, built in 1893. In its place, SEPTA trains began using the newly built Market East station, a four-track underground station with two 868-foot island platforms.

SEPTA trains use the upper level of the two-level 30th Street Station in Philadelphia. There, passengers can make connections to Amtrak Northeast Corridor and Keystone Corridor trains, New Jersey Transit Atlantic City Line trains, the Market-Frankford Subway-Elevated, and subway-surface trolleys. At Market East station in Center City, passengers can connect to the Broad Street Subway, the Market-Frankford Subway-Elevated, and PATCO’s 14.5-mile Lindenwold High-Speed Line to Camden and Lindenwold, N.J. A transfer to the Broad Street Subway can also be made at SEPTA’s Fern Rock station north of Philadelphia.

In SEPTA timetables, certain limited-stop rush-hour trains are given distinguishing names, such as the Neshaminy Limited express train on the West Trenton Line.