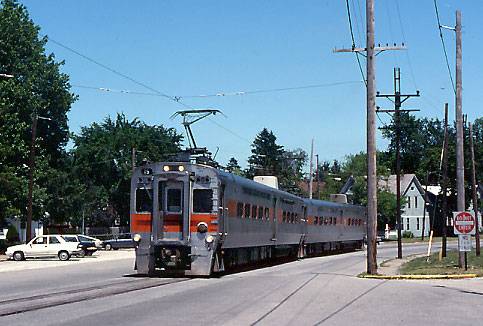 A pair of NICTD South Shore MU cars, led by #15, traverse the streets of Michigan City, Ind., with train 508 on June 13, 1998, at 1:28 p.m. Street running is one of the highlights of this interurban’s operations.
George Fletcher
Passenger service on the South Shore dates back to 1903, with the opening of the 3-mile streetcar line Chicago & Indiana Air Line Railway.

Four counties formed the Northern Indiana Commuter Transportation District (NICTD) in 1977 to provide funding for the South Shore’s commuter service, after the railroad filed a petition with the Interstate Commerce Commission to abandon service. In 1982, the agency purchased a new fleet of electric M.U. cars from Sumitomo Corporation built by Nippon Sharyo. NICTD began managing the South Shore’s commuter service in 1989, after another proposal to abandon service was filed and this time approved. In 1990, NICTD purchased the right-of-way from new owners Anacostia & Pacific, who retained trackage rights for freight operations.

Daily service is provided on an 89-mile route between Chicago, Michigan City, and the South Bend Airport, serving 19 stations. Between Kensington and Chicago’s Randolph Street Station, South Shore trains operate on Metra’s Electric Line, but use their own platforms at Randolph Street. The service is partially subsidized by Metra.

The South Shore is one of only two passenger rail systems in North America that operate exclusively on electric power. (The other is the SEPTA Regional Rail system in Philadelphia.)