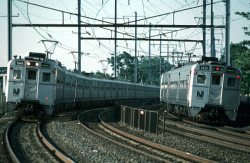 Commuter service that had been provided by the Penn Central, Erie Lackawanna, Jersey Central, Reading, and Pennsylvania-Reading Seashore Lines was taken over by Conrail in 1976. The Northeast Rail Service Act, signed in August 1981, gave Conrail the authority to divest itself of its extensive and costly commuter operations by the end of 1982. NJ Transit Rail Operations began on January 1, 1983.

The New Jersey Department of Transportation had been established in 1966, subsidizing commuter rail service provided by the freight carriers, and funding equipment purchases and capital projects for both rail and bus lines through the Commuter Operating Authority. New Jersey Transit Corporation was created in 1979 to oversee public transportation throughout the state. One year later it began operating a network of bus routes. In April 1982, the Rail Operations division of NJ Transit was formed and took the necessary steps to assume control of Conrail’s New Jersey commuter services.

Since then, the agency has undertaken a series of capital projects designed to expand its routes, knit together previously disconnected parts of its system, and increase travel options for passengers.

Conversion of the electrified Morris & Essex Lines from a 3,000-volt DC system to a 27,500-volt AC system – a project begun by Conrail – was completed on August 28, 1984. On the North Jersey Coast Line, catenary was extended five miles from South Amboy to Matawan in 1982, then another 16 miles in 1988 to Long Branch (where a new layover yard was constructed).

Another route amalgmation occurred on September 30, 2002 with the opening of the $63 million Montclair Connection, a 1,500-foot link between the former Boonton Line (an Erie Railroad property) and the Montclair Branch (former Lackawanna) in the city of Montclair. As part of the project, the Montclair Branch’s electrification was extended from downtown Bay Street station to Montclair State University, enabling electric trains to provide direct service to New York Penn Station. Diesel-powered trains were rerouted off the Boonton Line at Montclair (the portion of the Boonton Line east of the new connection was later taken out of service) and onto the Montclair Branch to travel to Hoboken via Broad Street Station in Newark.

NJT’s routes were further knit together on September 6, 2003, with the opening of a $450 million transfer station at Secaucus Junction in the New Jersey Meadowlands. The station enables riders to transfer between trains on electrified routes serving New York Penn Station and Newark, and trains on diesel-powered routes serving Hoboken Terminal. The station cuts commuting times to midtown Manhattan by 15-20 minutes for commuters on diesel-powered routes.

In March, 2004, NJ Transit opened its 34-mile RiverLINE, a diesel-powered light rail line linking the state capital at Trenton (incuding a stop at NJT’s Northeast Corridor station) with the city of Camden, and a connection to the Philadelpia-Camden-Lindenwold PATCO rapid transit system. The RiverLINE uses a portion of the Camden & Amboy, New Jersey’s first railroad.

The result of all of this capital investment is a 476-mile system comprised of nine lines and two branches serving 162 stations. NJ Transit commuter trains carry 237,000 daily riders, with 65 million trips made in 2005. Seventy percent of NJ Transit’s rail passengers travel through New York’s Pennsylvania Station.

All lines are owned, operated, dispatched, and maintained by NJ Transit, with the exception of the Northeast Corridor and Atlantic City Line, which are owned by Amtrak, and the Port Jervis Line west of Suffern, N.Y., owned by freight railroad Norfolk Southern.

MTA Metro-North Railroad provides funding and equipment for service on the Pascack Valley and Port Jervis Lines, both of which extend into New York state. NJ Transit operates the trains under contract to Metro-North, which owns and maintains the station facilities.

NJ Transit has a diverse array of equipment. The agency operates electric multiple-unit cars from General Electric (nicknamed Jersey Arrows), rebuilt by ABB Traction, which cover service on electrified portions of the Morris & Essex, Northeast Corridor, and North Jersey Coast Lines. NJ Transit also has a fleet of electric locomotives that operate in push-pull service. The ALP-44 locomotives were built by ABB Traction, while later models ALP-44M (M for microprocessor equipped) and ALP-46 motors were built by Adtranz.

Diesel-powered, push-pull trains rely on F40PH-2CATs, which are EMD F40PH-2s later overhauled with Caterpillar head-end power engines at Conrail’s Juniata shops in Altoona, Pa.; hybrid GP40FH-2s from Morrison-Knudsen – rebuilt GP40 locomotives with F45 cowl carbodies; an assortment of GP40PH-2s, some rebuilt from GP40s by MK, others rebuilt from CNJ GP40Ps by Conrail; and GP40PH-2Bs rebuilt from Conrail GP40s. In 2005, NJ Transit received the first of its newest diesels, PL42ACs built by Alstom. In 2005, NJ Transit operated 72 diesel locomotives, plus 11 others owned by MTA Metro-North.

Many of NJ Transit’s single-level, push-pull coaches and cab cars (plus 67 other cars owned by Metro-North) have been manufactured or rebuilt by Bombardier, although the “Comet V” cars were delivered by Alstom. NJ Transit coaches are referred to as Comets followed by a number indicating their generation, a tradition begun in the 1970s when Pullman-Standard delivered NJ DOT’s first fleet of push-pull cars for use on Erie Lackawanna lines.

Several older electric M.U.’s were converted into depowered coaches by Morrison Knudsen, and some older Comet II and Comet IIB coaches were rebuilt by AAI Corporation. In 2006, the agency received the first of a 231-unit order of bilevel coaches manufactured by Bombardier, which were built to operate on NJT’s electrified lines, including the Hudson River tunnels to New York’s Penn Station.

NJ Transit’s Meadows Maintenance Facility in South Kearny, N.J., handles heavy repairs to equipment. There are 15 storage yards across the system, 11 of which are owned by NJT.