Coal for power plants is the backbone of U.S. railroading. Here’s where it comes from and where it goes to in the Northeast 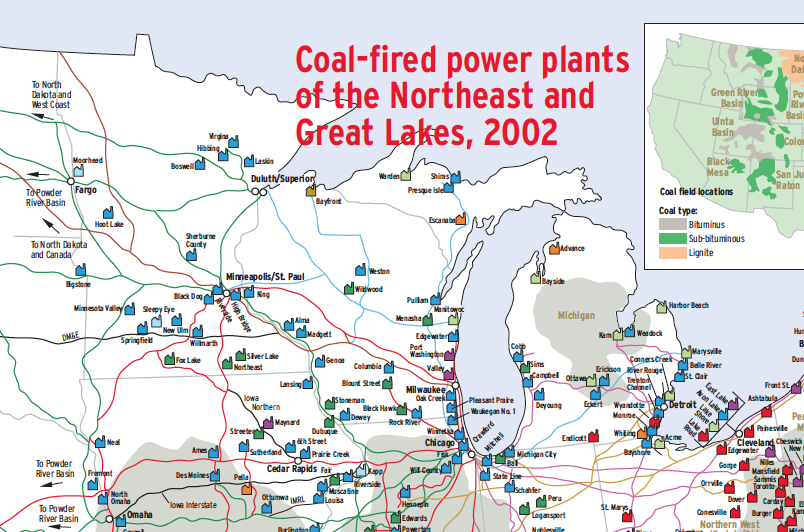 Coal is the most important rail commodity in the United States. In the early 2000s, when this map was produced, coal accounted for one of four cars loaded and slightly more than 20 percent of rail revenue. Eighty percent of the coal goes to the generation of electricity at steam power plants, so a map of these plants and their source of coal provides many insights into traffic patterns and railroad profitability.

Coal is not a uniform commodity. It varies greatly in heat content, melting point of the ash remaining after combustion, and sulfur content — the source of acid rain. Before engineers establish a plant’s design, they compare price and availability of various coal sources with the cost of building the plant for that type of coal and the net efficiency that results, and project this over a plant’s 30- to 50-year lifetime. Plants can be reconfigured to burn different coal types, but usually not without fearsome expense. It’s all a difficult bet on the future.

Rail transportation of coal and transmission-line-resistance losses are huge costs for an electric utility. Ideally a power plant has a coal mine on one side and its load base (e.g., a city) on the other. As seen on the map, many Eastern coal-fired power plants are clustered about the field that fuels them. As distances from coal fields to plants increase, so do rail transportation costs. Natural gas, and Venezuelan oil delivered by tanker or barge, are thus the preferred fuel for most New England power plants.

Now that acid rain is a major concern, many plants designed for Eastern high-sulfur coal have installed stack scrubbers or switched to low-sulfur coal sourced primarily from the Powder River Basin in Wyoming and Montana. It’s a huge expense either way.

The area of this map — the Official Territory east of Chicago and north of the Ohio River — is the big play in coal, because here are found most U.S. coal-fired plants and many coal fields. In 2002, Powder River Basin coal had not yet penetrated much beyond the Mississippi River and the Great Lakes shorelines because of shipping cost, its low heat/high moisture content, and competing local sources. Political decisions favoring further reductions in acid rain over cheap power would extend Powder River coal’s horizon farther east and south.