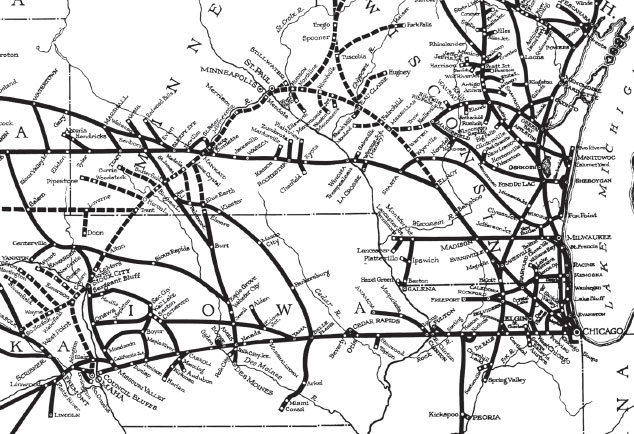 This Map of the Month was featured in the August 2002 issue of  Trains magazine.

If ever two railroads practiced seamless service decades before it became a railroad industry buzzword, it would be the Chicago & North Western and the Omaha Road.

The Omaha Road, the usual shorthand for the Chicago, St. Paul, Minneapolis & Omaha, was like most late-19th-century roads an amalgamation of small lines and some new construction. The C&NW, observing how the Omaha gave it bee-line routes to Minneapolis-St. Paul and Duluth-Superior from Chicago and Omaha, bought a bare majority of its stock in 1882.

Wheat, flour, coal, lumber, and merchandise flowed over the combination in harmony. Nebraska wheat loaded in C&NW boxcars went up the Omaha to flour mills at Minneapolis. Reloaded with flour, the boxcars took the two roads to the consuming centers of Chicago and Milwaukee. Reloaded with merchandise and lumber for Nebraska farmers, back the boxcars went for more wheat. It was all quite profitable.

Though in every sense servant to the system, the Omaha Road was its own railroad with headquarters and rolling stock until 1957, when it was leased to the C&NW. Its paper existence lasted until the formation of employee-owned C&NW Transportation Co. in 1972. Omaha lines on today’s Union Pacific map include the two trunks from St. Paul to Wyeville, Wis., and Sioux City, Iowa, plus a few short branches.

In 1930, the 10,195-mile C&NW system was one of only seven U.S. systems over 10,000 miles. The others were Southern Pacific, Santa Fe, New York Central, Burlington Route, Pennsylvania, and Milwaukee Road. C&NW’s acquisition of Minneapolis & St. Louis and Chicago Great Western boosted system mileage to 11,401 by 1968. Abandonment of redundant lines whittled the C&NW to 4991 miles when it merged with UP in 1995.