The Quad Cities of Davenport and Bettendorf, Iowa, and Rock Island and Moline, Ill., straddle the Mississippi River, creating an historic intersection of river and rails. In April 1856, the Chicago, Rock Island & Pacific’s predecessors opened the first Mississippi River crossing, known as the Government Bridge, at Davenport. Later, a riverboat struck the bridge and burst into flames. The lawyer arguing the railroads’ side in the ensuing litigation was Abraham Lincoln. 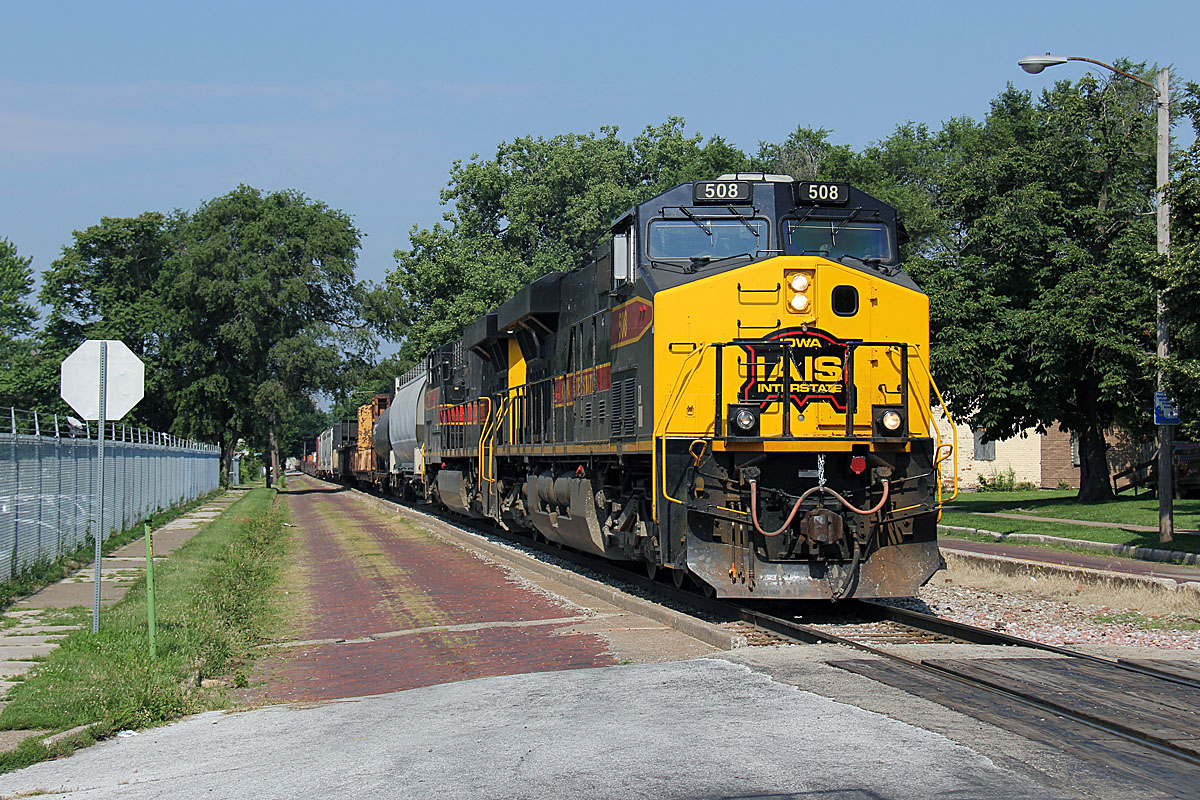 An eastbound Iowa Interstate train traverses Fifth Street in Davenport.
Michael D. Harding
The Iowa Interstate’s main line to Chicago runs through the Quad Cities. It enters Davenport from the northwest, crossing Division Street on a bridge before running between the traffic lanes of Fifth Street for several blocks. At the east end of downtown, it again curves southeast and crosses the Mississippi River on the upper level of the Government Bridge while vehicle traffic runs on the lower level. On the Illinois side, Iowa Interstate uses trackage rights over BNSF Railway through Rock Island, Moline, and
Silvis to reach home rails in Colona, Ill. Along that section Iowa Interstate has its own yards in Rock Island and Silvis.

The Iowa Interstate runs daily road trains between Council Bluffs and Blue Island, Ill. The trains, known as CBBI and BICB, are both often daylight runs through the Quad Cities. Other Iowa Interstate trains and yard jobs can also make an appearance throughout the day.

Canadian Pacific’s former Iowa, Chicago & Eastern main line runs along the Mississippi River on the Iowa side. Its base of operations is Nahant Yard, located west of downtown Davenport alongside the Mississippi. Closer to downtown, a second, smaller yard is located immediately west of Schmidt Road, where a connection to the Iowa Interstate main branches and climbs up to the road’s main just west of the Fifth Street section.

CP runs a few road trains on its main line, along with extra grain and other trains. BNSF loops through the Quad Cities with a road train to Clinton on CP trackage rights.

BNSF operates through Rock Island to the Crescent Bridge where it crosses the Mississippi and ties into the CP main line in Davenport. BNSF uses trackage rights on CP to run north to Clinton, Iowa.

Local jobs and yard jobs from all three railroads work industries on their respective tracks and where they have rights. Iowa Interstate dispatches the BNSF line, along with the rest of the railroad’s own main line. Both the Iowa Interstate and CP issue track authorities by radio so a scanner is essential around the Quad Cities.

Riverside parks in Davenport provide nice spots to relax while waiting for trains, within sight of the CP main ducking under the Iowa Interstate on the Government Bridge.

FOR YOUR FAMILY
Moline is the world headquarters of John Deere, and the John Deere Pavilion museum showcases the company’s long history. Several art and science museums, along with the Rock Island Arsenal Museum, Mississippi River Visitor Center, and Quad City Botanical Center, provide cultural opportunities within the Quad Cities. There are also several casinos and riverboats that offer cruises on the Mississippi. Upriver, LeClaire, Iowa, is the home of Antique Archaeology of “American Pickers” TV fame and the Buffalo Bill Museum.