Southern Pacific's fight to abandon part of the original transcontinental railroad, and the 'unspiking' ceremony that followed 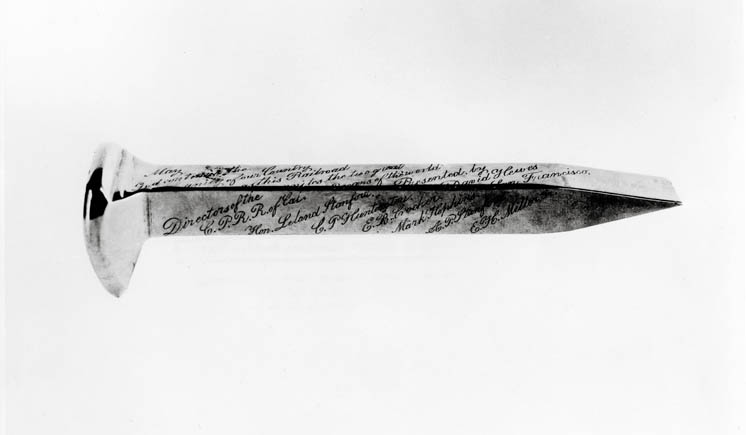 The famed Golden Spike, driven at Promontory on May 10, 1869, was engraved with the names of the officials present for the ceremony. Less than 75 years later, that first line was sacrificed to fill metal needs during World War II.
Southern Pacific

By the 1940s, the original Transcontinental Railroad main line around the north end of the Great Salt Lake had fulfilled its original purpose of connecting the eastern United States with California, and was now needed for World War II.

The Promontory Branch, as it was known by then, ran through the desert from Corinne through Promontory to Lucin. It had not been profitable for Southern Pacific since the Lucin Cutoff across the Great Salt Lake was completed in 1904, but was kept intact as a secondary route. Traffic consisted of a weekly mixed train and occasional extra freights in peak harvest season.

Southern Pacific fails to meet operating costs and seeks abandonment
SP first tried to abandon the Promontory Branch in the early 1930s after decades of losses. On April 3, 1933, in the midst of the Great Depression, the road petitioned the Interstate Commerce Commission for permission to cease operation over the majority of the line between Kelton and Lucin, Utah, 55 miles.

The first abandonment hearings were held by the Public Utilities Commission of Utah on behalf of the ICC. The high desert land around Promontory was used primarily for grazing cattle and wintering sheep, and several shippers and ranchers protested the abandonment, stating that the railroad was needed to haul in feed for their animals since the few dirt roads in the area were not passable in winter. However, there was very little opposition. By the 1930s just 60 families lived in the region, so passenger traffic was negligible, with a single coach or the train’s caboose being adequate for the few travelers carried.

A surprise objection came from the U.S. government, which opposed the abandonment as it desired to keep the Promontory Branch intact either as a backup for the route across the Great Salt Lake or as a secondary main line in the event of war. It reminded SP that since the line had been part of the original Transcontinental Railroad route and the land grants associated with it, the company had a moral (but no legal) obligation to maintain it.

SP countered the arguments by showing that it lost money operating the branch. The parties in favor of keeping the line intact claimed that the losses incurred in its operation were insignificant to the Southern Pacific’s overall finances.

Based on these and other considerations, the ICC concluded that benefits to the sheep and cattle industry outweighed any inconvenience to the railroad — even though SP was only proposing to discontinue operations and to keep the line in serviceable condition. Thus, the initial abandonment effort failed when the ICC denied the petition on June 11, 1934.

The Southern Pacific seeks abandonment a second time
SP was not willing to give up so easily. The petition was reopened on December 12, 1934, this time covering the Kelton–Lucin segment. Although the railroad’s operating deficit had decreased, this was primarily due to a reduction in maintenance. After years of neglect, the Promontory Branch was in poor shape — the track was deemed only “passable.” Future revenues were estimated to be unchanged. In spite of all of these factors the ICC again denied the petition to abandon on March 17, 1936.

Despite the ICC ruling, on March 31, 1937, the SP essentially abandoned the western part of the branch. This was accomplished by providing only “on-call” service between Kelton and Lucin after the Public Utilities Commission of Utah gave the railroad permission to discontinue regular service. Trains now operated on Wednesdays from Ogden to Kelton as required. Passenger service was discontinued three years later, in April 1940. 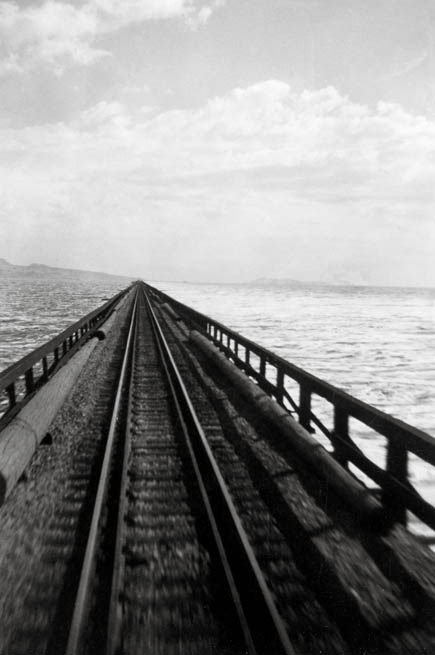 The 1904 completion of the Lucin Cutoff across the Great Salt Lake relegated the original transcontinental main line to the north to secondary status, leading to its eventual removal.
A. P. Hill collection

In March 1942, three months after the Japanese attack on Pearl Harbor, Southern Pacific again proposed abandonment — this time for the entire 120.8 miles between Lucin and Corinne. Traffic between Kelton and Lucin, mainly animal feed and livestock, had not changed much in the six years since the first abandonment hearings. One of the only gains was from the Rosette Asphalt Co. of Rozel, Utah, which was shipping out drums of asphalt at a rate of one carload a month, up from one or two annually in previous years. The expense of operating the line from Corinne to Dathol (Corinne Junction) was $5,288, much greater than any income brought in by the minor increase in traffic.

Now was the time to tear up the line, Southern Pacific argued, because the rails were materials “urgently needed at the present time” due to the war. Additionally, in stark contrast to its earlier opposition, the federal government supported the abandonment since the gains to be made from rail salvage outweighed any possible role the branch could play in wartime traffic.

Once again abandonment hearings were held, and once again there was opposition. It was noted that many of those protesting did not ship by rail, chief among them local chambers of commerce and other civic groups. Box Elder County stated it did not want to lose the property taxes paid by the railroad.

This time, the ICC quickly approved abandonment, with an effective date of June 11, 1942. It was stipulated that SP would sell the 4.8 miles between Corinne and Dathol to Oregon Short Line, a Union Pacific subsidiary, and the remainder of the line would be scrapped and the rails turned over to the U.S. Navy.

Salvage operations began almost immediately. A contract to lift the rails was awarded to Hyman-Michaels of Chicago. This firm had been salvaging rail lines for many years; now it was to dismantle the most historic of them all.

Scrapping of the branch started near Corinne on July 1, 1942, with the gang working westward. SP required Hyman-­Michaels to provide its own motive power, which consisted of former Minneapolis & St. Louis 2-6-0s Nos. 311 and 319. Through the next two months, the scrappers moved across the desert, salvaging rails, ties, and all other hardware for reuse. By mid-August they were camped at the Blue Creek water tank east of Promontory, and by early September their outfit train had been relocated to Rozel, 8 miles west, where water was available for the men and the locomotives.

A ceremonial “unspiking” of the Last Iron Spike
Lost to time are the details of who conceived the idea of an unspiking ceremony to pay homage to the original event. However, out of that person’s proposal came a coordinated effort to arrange for an event that local and state politicians, civic and business leaders, and members of the military and the media could see history reversed. The ceremony was to be part patriotic fervor, part photo opportunity, and part social function. Essential to the plan was the support of Hyman-Michaels, whose owners backed the unspiking as a way to obtain publicity for their firm.

By August 1942 the press reported that “within a few weeks” there would be a special ceremony to commemorate the unspiking of the Golden Spike. The date was originally set for September 4, 1942, when the scrap gang expected to be at Promontory. However, it was later moved back to September 8 because Hyman-Michaels was behind schedule due to the wartime labor shortage. Workers were hard to come by even at top wages of 75 cents an hour.

Additionally, the scrappers were hampered by having to burn thick brush off the track before pulling up the rails. Range fires were a major a concern, because if one got out of control it would pose a danger to adjoining grain fields and grazing lands, so the work was slowed to ensure that no such event occurred.

Meanwhile, for the unspiking ceremony, Southern Pacific prepared a special spike in its Ogden shops. Newspaper reports from the time do not indicate what was “special” about it, although it was presumably a steel spike dipped in brass or painted to give it the appearance of gold. It was presented for the ceremony by SP’s Salt Lake Division Superintendent L. P. Hopkins, but whether this spike was used during the unspiking is uncertain. 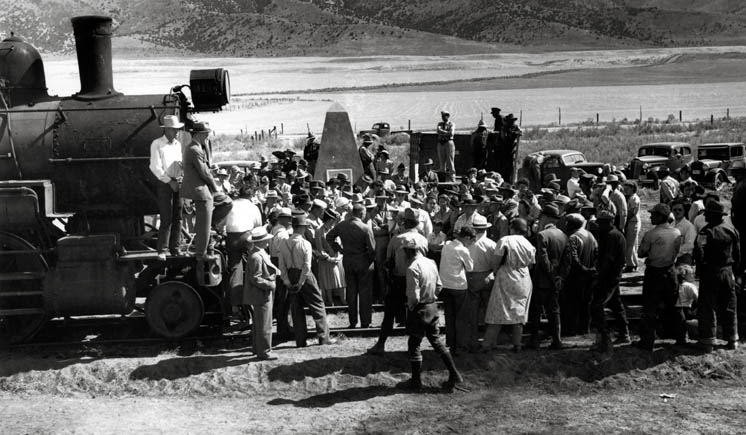 Locomotive 311 of scrapper Hyman-Michaels waits with the crowd near the Last Spike obelisk for the un-driving ceremony to start on September 8, 1942.
Classic Trains Collection

JEFF TERRY is a Utah native, railroad photographer, and historian who lives near St. Paul, Minn. He is a rules instructor for Canadian Pacific in the Twin Cities. THORNTON B. WAITE lives in Idaho Falls, Idaho, and has written several books and numerous articles on railroad history. JAMES D. REISDORFF is a freelance writer and publisher from David City, Neb. His South Platte Press has published more than 100 books, mostly on western railroad topics, since 1982. That includes The “Un-Driving of the Golden Spike,” released in 2013, by the same authors, on which this story is based.

Interested in learning more about the history of the Transcontinental Railroad? You’ll find it in our special issue, available online.