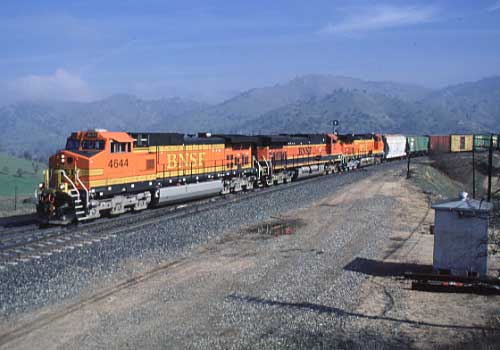 A westbound BNSF freight train rounds the Tehachapi Loop in Southern California.
Howard Ande
The product of the Sept. 22, 1995 merger of the parent companies of the Atchison, Topeka & Santa Fe Railway and the Burlington Northern Railroad, BNSF is one of the west’s two giant railroad systems. Its 32,000-mile network (24,000 owned route miles plus 8,000 route miles of trackage rights) covers the western two-thirds of the U.S., serving 27 states and two Canadian provinces. In 2005, Burlington Northern & Santa Fe Railway became BNSF Railway, and introduced a new logo concurrent with the launch of the railroad’s new brand. (The corporation name remains Burlington Northern Santa Fe.)

Burlington Northern had been formed on March 1, 1970 by the merger of Chicago, Burlington & Quincy; Great Northern; Northern Pacific; and Spokane, Portland & Seattle. BN operated in three principal corridors: Chicago and Minneapolis-St. Paul (the Twin Cities) to Portland and Seattle in the Pacific Northwest; Chicago to Omaha, Denver and Montana, including the coal-rich Powder River Basin in Wyoming; and from Denver, Kansas City, St. Louis to Dallas-Fort Worth, Memphis, and Birmingham, Ala. On November 21, 1980, BN acquired the St. Louis-San Francisco Railway (the Frisco), once owned by the Santa Fe in the 1890’s, whose main lines formed an X from St. Louis through Oklahoma to Texas and from Kansas City to Birmingham and Pensacola, Fla., (making BN and successor BNSF a true transcontinental railroad).

The Atchison, Topeka & Santa Fe Railway Company was chartered in 1859 and operated under that name, or its better known nickname “The Santa Fe,” since 1863. The Santa Fe stretched from Chicago via Kansas City and Albuquerque to California, serving the Los Angeles and San Francisco areas, plus Denver, Phoenix, and extensive parts of Oklahoma and Texas.

BNSF announced its intent to merge with Canadian National on December 20, 1999, creating a 50,000-mile rail network. In response, the Surface Transportation Board imposed a 15-month moratorium on rail mergers on March 17, 2000, in order to rethink the rules under which future merger proposals would be evaluated. As a result, BNSF and CN called off their proposed merger on July 20, 2000.

Each day, BNSF originates between 40 and 60 loaded coal trains from Powder River Basin mines in northeastern Wyoming and southeastern Montana, with an equal number of empty trains arriving to be reloaded. Other coal-producing regions served by BNSF include Colorado, Illinois, New Mexico, and North Dakota. In 2004, BNSF moved 255 million tons of coal.

Roughly two-thirds of the 80-100 daily trains that cross the Southwest on the ex-Santa Fe transcontinental main line are double-stack container trains and piggyback trains moving between the eastern gateways of Chicago, Kansas City, Memphis and Fort Worth, and the California terminals of San Bernardino, Los Angeles, Long Beach, Stockton, and Richmond. Intermodal traffic is also heavy on the Chicago-Fort Worth corridor, and between Chicago and the cities of Seattle and Portland, Ore.

Between August and November, BNSF handles nearly 2,000 cars of grain a day, originating in the Midwest, Great Plains and Pacific Northwest. Corn and wheat make up more than half of the railroad’s grain movements. The Minneapolis-Seattle corridor sees grain traffic headed for domestic producers and the ports of Seattle, Tacoma, and Vancouver, Wash.