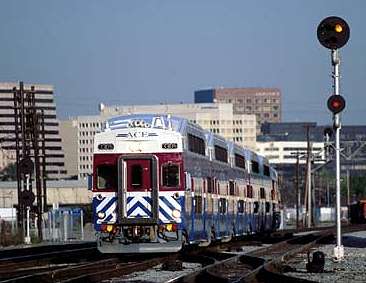 Service began on October 19, 1998. Trains operate in push-pull fashion with F40PH-3Cs built by Morrison-Knudsen and successor MotivePower, Inc., and bilevel coaches from Bombardier. Initial operations consisted of two round trips, with a a morning turn-back between San Jose and Fremont added in February 2000. On March 5, 2001, the turn-back train was dropped and a third round trip was added departing Lathrop-Manteca later in the morning and returning in the evening. Concurrent with the March schedule change, ACE trains added a stop at Caltrain’s station in downtown Santa Clara.

A fourth round trip was added in August 2006.

In midday and late evening, passengers can also board an ACE bus from San Jose to Stockton. ACE worked out a temporary trackage rights agreement with Union Pacific that expires December 31, 2003. The success of the service, which carries about 2,200 passengers each way, has prompted the Authority to seek permanent trackage rights.

There is no service on weekends or holidays.