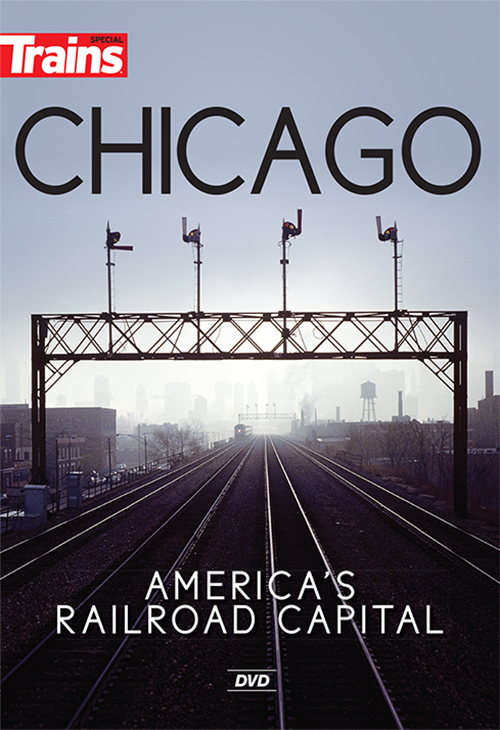 Generations of railfans have been impressed at the magnitude of railroad operations in and around the Windy City. Currently, the Chicago area sees 25 percent of US rail traffic and almost half of the nation’s intermodal shipments. Chicagoland, of course, includes locations in the greater metropolitan area, loosely defined as extending some 40 to 50 miles from the Loop. Trains Magazine set out to make a video introducing the Windy City to those who have never been there, or those, like this reviewer, have not been there lately. The trick is to present an overview of contemporary railroading in Chicagoland in a watchable, one-hour DVD.

The program is divided into five chapters plus bonus footage that collectively cover the Chicago scene, as it exists in 2016/7. The first chapter provides a historical context before taking us on a visit to Union Station. This classic location is in the midst of a $60 million renovation and Trains takes us behind the scenes to see how parts of the station are being “repurposed” into lounges and special event areas. Amtrak also intends to restore the station’s famous skylights to increase levels of natural light while making better use of the station’s “Great Hall. This segment concludes with the departure of the westbound Empire Builder to Seattle and Portland.

Although Chicago is known as a hub for Amtrak, most rail passengers to Chicago ride Metra, the Windy City’s 11-line, 437-mile commuter rail system. Chapter 2 highlights this impressive network that carries more than 300,000 passengers each weekday, approximately 64,000 of them ride west on the ex-CB&Q line to Aurora. Surprisingly, the BNSF line does not see the most daily trains; the ex-Illinois Central “Metra Electric” line to University Park has 170 daily trains (left unsaid is whether this total includes the “Electric’s” two branches).

A highlight of the Metra coverage is a visit to Tower A2, which is illustrative of Metra’s aging infrastructure. The tower operator provides a brief explanation of the switch machine, and then we inspect the downstairs relay room. This drives home the point that Metra has lots of old infrastructure must be maintained so that reliable service must be maintained. Much of Metra’s physical plant is over 90 years old.

Chapter 3 examines the Chicago Region Environmental and Transportation Efficiency Program, a multi-billion dollar public-private partnership that is implementing a series of safety and capacity improvement projects designed to improve the circulation of rail traffic in the Chicago area. Currently, fewer than half of the program’s 70 projects and complete or under construction and we visit four of them: Bellwood, the Englewood flyover, Deval interlocking and the Belmont grade separation in Downers Grove. Together, these typify the types of projects in the CREATE program, about half of which remain unfunded. To illustrate the Englewood flyover, one of the more noteworthy projects, there is footage taken out the back of a southbound Metra train as it passes over the Norfolk Southern line below. One can see that the project designers left room for a third track, should future needs require building one. After seeing four CREATE projects in action, it was necessary to reread the coverage in Trains to reacquaint myself with the program.

The second half of the video concentrates on six “hot spot” train watching locations. Starting with the famous Roosevelt Road spots, we visit BNSF’s “Racetrack” to Aurora, the former Elgin, Joliet & Eastern JB Tower in West Chicago where the “J” crosses a UP line. Then it is off to UP’s Geneva Line, Blue Island, Homewood, ending up at Matteson, the site of a new connection between CN’s former EJ&E and IC lines. There is an observation platform here with useful interpretative displays.

Watching this program that was recorded approximately four years following this reviewer’s last trip to Chicagoland really drove home the point that change is constant. The quaint old Oak Street bridge overlooking Metra’s Highlands station, for example, has been replaced by a modern but bland structure with a nuisance fence designed to inhibit photography. And the legendary 40-year-old ex-IC “Highliners” on Metra’s ex Illinois Central commute line have been completely replaced by new stainless steel Nippon Sharyo EMUs equipped with power outlets and bathrooms.

If I had to identify one flaw with this program, it would be the use of “jump cuts” as a method of speeding things along. At Bellwood, for example, a UP train coming off the flyover makes several abrupt fast-forwards, which this viewer felt distracted from the story being told. But this is a minor critique; this DVD provides a nice introduction to the Windy City rail scene. Kalmbach produced a video that will appeal to railfans while not putting lay audiences to sleep. Those in need of more information are directed to a special issue of Trains with the same title as the DVD.