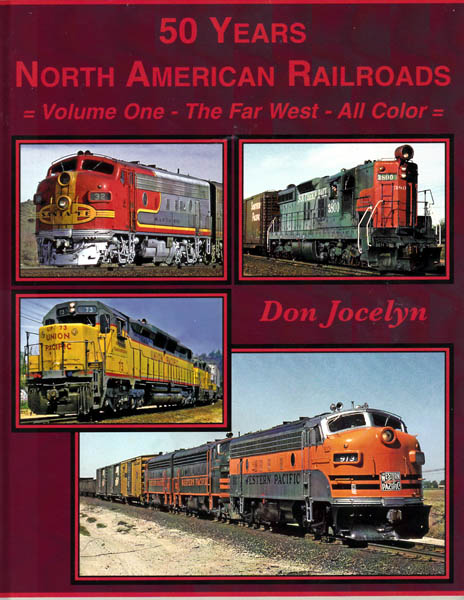 Four Ways West has released the first volume in a new pictorial book series featuring a photographic retrospective of North American railroads during the past 50 years. Volume one looks at the railroads of the “far west,” defined in this case as California, Nevada, and western Utah. Most of the photos are from California, as one might expect given its large population centers and many scenic rail routes and Central Coast members will enjoy the subject matter immensely. The author and publisher wisely opted for through coverage by restricting the book’s geographic scope to two and a half states.

A great deal of the coverage shows Southern Pacific; Union Pacific; Atchison, Topeka & Santa Fe; and BNSF Railway, with one chapter devoted to the ever-popular Western Pacific. Additionally, many short lines such as Pacific Harbor Line, Santa Maria Valley, McCloud, and Nevada Northern are illustrated, as well as Amtrak and commuter operations including SP/Caltrain, Metrolink, ACE, and Coaster. There are not many photos of steam locomotives, although ex-SP 4-8-4 No. 4449 is seen on the American Freedom Train in December 1975. Overall, the focus is on what was in regular service at the time the photo was taken. After perusing this book, one can appreciate the changes in the railroad scene in the past five decades.

The 50-year timeline means that the oldest photos date to the mid-1960s. The oldest dated photo shows westbound SP freight picking up orders at Winnemucca, Nev. Other late-1960s photos remind us that some surviving “black widow” painted locomotives were still extant a decade after SP introduced the red and gray look. Other vintage illustrations feature older locomotives and/or pre-Amtrak passenger trains.

This book follows the publisher’s successful format for its all-color pictorials with well-reproduced photos on printed on thick, glossy paper. Captions are well written and informative, but as always, compromises are necessary in balancing photographs with captions.

The book is organized by region, which allows the reader to understand changes over time. The coverage begins in metropolitan Los Angeles, and then examines the major routes radiating out from the basin including the Surf Line, Beaumont Hill, Soledad Canyon, Cajon Pass, Tehachapi, and the Coast Line. Later chapters cover Northern California and UP, SP, and WP routes across Nevada to Utah. Although the Barstow area is included, the Santa Fe’s Needles subdivision is left for a future volume.

Coverage of the Peninsula Commute Service under the auspices of SP and Caltrain is of personal interest to this Bay Area-based reviewer. An undated photo shows an FP7 on SP commute train No. 116 with bilevels still in the two-tone gray scheme at an undisclosed location (Reportedly Menlo Park). Additional photos include views of trains with various locomotives including a leased Amtrak P30CH from 1978 and an up-to-date illustration of a Caltrain MP36.

Other subjects of interest, in no particular order, are: clean SP locomotives, UP and SP “double diesels,” SPSF “Kodachrome” units, AT&SF Super Fleet Warbonnets of both generations, and the Western Pacific. One also gains an appreciation of Golden State passenger trains over the years, from the remnants of private railroad streamliners through modern Amtrak and commuter trains.

Trains used to run a “Difference in Decades” feature, with photos taken at the same location but years apart. Something similar occurs in several places in the book, as we see Amtrak F40s give way to “Pepsi Cans” and Super Fleet units replace “Kodachromes” on Sullivan’s Curve. This volume is an excellent reminder that change is constant, and I can recommend it highly. It will be interesting how this treatment is applied to other parts of country.