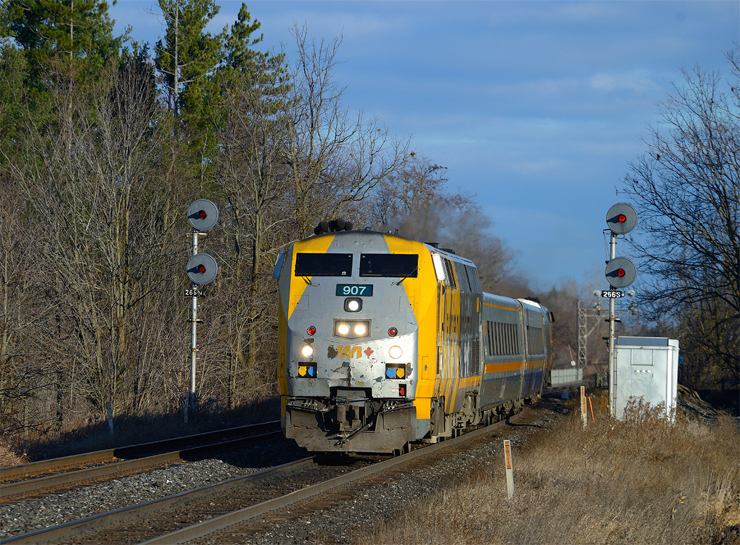 TORONTO — VIA Rail Canada trains began a two-day reroute onto Canadian National’s Halton Subdivision on Saturday, as the Metrolinx Oakville Subdivision used by GO Transit trains is closed for signal and plant upgrades through Nov. 29.

In a rare opportunity for mileage collectors, VIA trains Nos. 71, 72, 75, and 78 are being rerouted onto the freight-only segment of the Halton Sub, adding 30 minutes to their schedules, so the rerouted trains can continue to offer service to the Aldershot, Brantford, Ingersoll, Woodstock, London, Glencoe, Chatham, and Windsor stations.

The freight-only section of the subdivision between Silver and Burlington West, 25 miles, was upgraded in 1964 and used as a cutoff to bypass downtown Toronto and reroute freight traffic to Toronto’s Macmillan Yard, which opened that year.

Milton, Ont., in the middle of that freight-only section, sees GO Transit commuter service as the terminus of the Milton line on CP Rail’s Galt Subdivision. The CN route has never had regular passenger service since the upgrade, only seeing reroutes every few years. For photographers, this marked the first time the line has seen the current VIA paint scheme.

GO Transit service is operating with a bus bridge between Union Station and Port Credit because of the track and signal work at Canpa, with GO’s Lakeshore line operating between Port Credit and Hamilton, and trains to Niagara Falls originating at Port Credit. The outage will continue through the end of service Sunday, with regular service for both GO Transit and VIA resuming Monday, Nov. 30.

— Updated at 8:30 p.m. CST with clarifications and additional information.