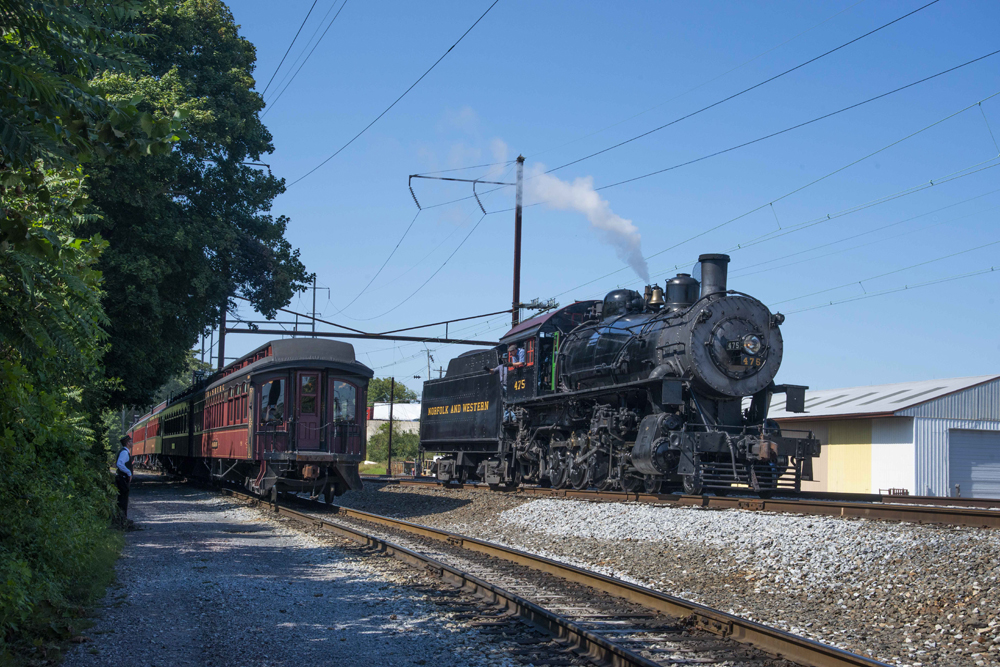 PARADISE, Pa. — Strasburg Rail Road’s 4-8-0 steam engine No. 475 collided with a tracked excavator or “trackhoe” parked on a spur Wednesday morning, Nov. 2, punching a hole in the engine’s smokebox. No injuries resulted and the engine, running light, remained on the track.

A combination of a misaligned switch — apparently left open when a maintenance crew tied down the trackhoe on the spur — and the engine crew’s failure to operate the engine at ”restricted speed” contributed to the collision.

Damaged were the smokebox front and door, some auxiliary metal pieces, and the headlight, as well as the bucket, piston, and hydraulic hoses on the trackhoe. The trackhoe arm did not pierce or deform anything vital to steam operation, such as No. 475’s flues or front flue sheet.

Operating rules define restricted speed not as a set velocity, but a method of observing the track ahead while in motion, in such a way as to be able to stop in half the distance to an obstruction, broken rail, misaligned switch or other irregularity. It applies mainly in yards and on sidings where trains or engines are moving at 10 to 15 mph max. Only where functioning block signals are in place — not the case here — and displaying that signal indication does it apply on main lines.

The accident occurred at 11:23 a.m. as the first passenger train of the day was reversing ends at the connection with Amtrak’s electrified Philadelphia-Harrisburg, Pa., Keystone Corridor, a location that is commonly called Leaman Place Junction. As is customary, the train departed the station at Strasburg with its engine running tender-first on the 4½-mile trip to Paradise. There, the train was left standing while the engine cut away and ran around to couple to the west end of the cars for the return trip. It was during this routine swapping of ends that the incident took place.

Contributing further to the situation is that, during the runaround move, the engine crew typically waves to the passengers on the standing train, potentially diverting attention from the track ahead.

The accident was widely viewed online via a Virtual Railfan streaming camera that is affixed to a pole at the exact switch involved, and also by a passenger riding the train who was taking video of the runaround movement.

After it was determined that everyone was safe, Strasburg dispatched its ex-New York Central SW8 diesel switcher No. 8618 to retrieve the passenger train, and it handled the two remaining scheduled passenger trips of the day. Afterward, No. 8618 ran to Paradise to bring No. 475 back to the Strasburg shop for examination.

Meanwhile, the railroad began firing up No. 89, a 1910 Canadian Locomotive Works 2-6-0 engine, to handle weekday trips for the remainder of this week. On Saturday and Sunday, when two trains are scheduled, No. 89 will share duties with the railroad’s third operable steam engine, No. 90, a 1924 Baldwin 2-10-0. No. 90 has 75 days remaining on its 1,472-day certification before a federally mandated inspection is required, and is expected to handle Christmas-train service before going down for overhaul.

According to sources, the damage on No. 475 looks worse than it actually is, and the shop crew believes that the engine can be repaired and back in service next week.

Federal Railroad Administration staff is expected at the railroad on Thursday to look over No. 475 and interview the crew.

Founded in 1832, Strasburg Rail Road is the oldest short line in the United States. Beginning in 1959, it was transformed from a weed-grown feeder line to the Pennsylvania Railroad into a major steam-powered excursion carrier with a machine shop that caters to many other steam railroads. Situated in the heart of Pennsylvania Dutch tourist country, it handles 250,000 to 300,000 passengers a year. It also services several freight customers.

14 thoughts on “Strasburg collision damages No. 475, no one hurt”