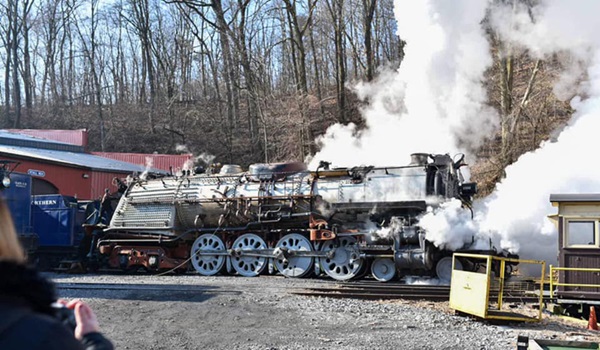 The big Northern, built by the Reading at its home-city shops in 1945, is one of four of the T-1 class remaining. Muller hopes that the engine will be running this spring, after being stored 29 years ago.

R&N shop forces lit a fire in the engine on Saturday, and let it warm up over the weekend. By Tuesday, the 2102 was up to its 240 psi working pressure. All components, including the boiler, injectors, feed water heater, and stoker, tested fine, Muller reports. A few leaks were discovered, and they will be repaired after the engine cools down. The 4-8-4 does not look quite ready to run, as the cab still needs to be reinstalled, and the tender is being rebuilt. The multi-year project has cost more than $1 million so far, and Muller says that he expects to spend another $100,000 for completion.

The T-1 worked in freight service until fairly late in the steam era, and the surviving four were saved from extinction by Reading’s program of “Rambles” excursions over the system during the early Sixties. Muller bought the 2102 in 1987 and ran it on passenger trains over his 13-mile Blue Mountain & Reading line north of Reading from 1987 to 1992. The 2102 also made a few off-line trips on Conrail routes during those years.

Bringing No. 2102 back to life has been part of Muller’s plans since it was taken out of service, but freight service on the growing Reading & Northern system always has been a priority. The company has a second, smaller steam engine in operation, former Gulf, Mobile & Northern 4-6-2 No. 425, which sees regular service on R&N’s frequent passenger excursions.

Although virtually all work on the R&N is performed by railroad employees, many volunteers helped on the 2102 project over the years. Some put in hundreds of hours, Muller said. Railroad supervisors have kept records of each volunteer’s hours and contributions, and those individuals will be granted cab time on future trips.

Muller plans for No. 2102’s first assignment to follow T-1 tradition, leading a long high-priority freight. It will to be on the head end of R&N’s hottest scheduled train, the North Reading Fast Freight, which makes a daily round trip from North Reading to Pittston, Pa.