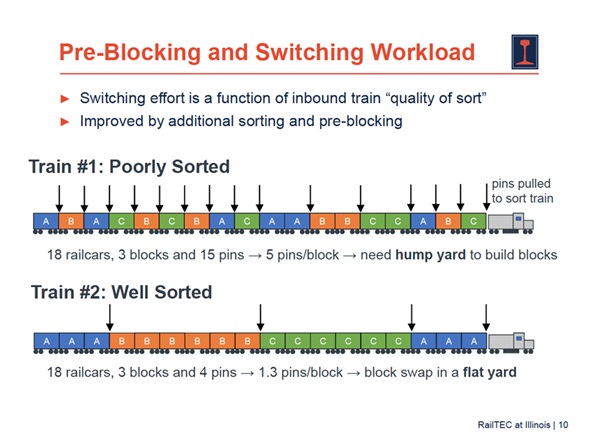 A trio of experts discussed the pros, cons, and reality of Precision Scheduled Railroading this week during the Midwest Virtual Rail Conference.

C. Tyler Dick, a lecturer and principal research engineer at the Railtec program at the University of Illinois at Urbana-Champaign, says the late E. Hunter Harrison’s operating model aims to combine the best elements of two opposing strategies: hold for tonnage and schedule adherence.

PSR, on the other hand, aims to provide consistent, frequent service to reduce both terminal dwell and transit time — but uses long trains and reduced rolling stock requirements to minimize costs, Dick says.

One way PSR does this, he explains, is by operating general-purpose trains instead of dedicated single-commodity trains.

Dick outlined a day’s operations at a hypothetical terminal operating under a traditional independent train plan developed for each business segment. The terminal would build an outbound merchandise train, grain train, and intermodal train that would depart roughly 8 hours apart, each with 150 cars. The maximum dwell time for a car in the terminal was 24 hours, with a mean of 12 hours.

By using general-purpose trains under a PSR approach, the terminal’s operations become much different. It still departs three trains per day, but each blends merchandise, bulk, and intermodal traffic into a 150-car train. Terminal dwell is reduced to a maximum of 8 hours and a mean of 4 hours, and the terminal’s average inventory is cut in half, to just 150 cars at any one point during the day.

Local service changes, too, Dick notes. Under a traditional model, a local yard might have two crews using four locomotives on the same shift to provide flexible service to customers near the yard. Under PSR, one local day crew and one night crew share one locomotive, which reduces cost but also service flexibility.

Traditional railroads rely on locals that gather traffic, bring it to local yards, and then send this hodgepodge of cars to a hump yard for classification. There the yard sorts the traffic into blocks for specific destinations on the railroad.

The PSR railroad instead focuses on pre-blocking outbound traffic at origin or local yards. Well-sorted trains arrive at classification yards and reduce their switching workloads, Dick explains. If there’s not enough volume to justify the expense of a hump yard, the railroad can convert it to a flat-switching facility that’s less expensive to operate, as Canadian National, Canadian Pacific, CSX Transportation, Norfolk Southern, and Union Pacific have done.

“No Precision Scheduled Railroad implements all of these elements,” Dick says. “And PSR is not one thing but a collection of actions that cumulatively results in changed operating practices and culture.”

Peter Swan, associate professor of logistics and operations management at Penn State Harrisburg, outlined what he views as PSR’s positive and negative elements.

On the plus side, PSR makes railroads more efficient by reducing the emphasis on hump yards, by using far less equipment, and significantly reducing transit time variability, Swan says. “A lot of customers in the rail industry are much better off under PSR than they were before,” he says.

On the flip side, PSR has made service worse for some shippers, Swan says. In some cases, transit times are longer, there’s more variability, and a bigger car fleet is required as a result, he says. That’s particularly the case for freight that originates or terminates on light-density lines where service frequency has been reduced.

One short line, Swan says, used to receive 50 cars three times a week via its Class I interchange. Under PSR, it now receives 150 cars once a week. That’s not universal, he points out, as some short lines located near busy terminals now see five-day Class I interchange that runs like clockwork.

Changing business practices — such as more strict demurrage and accessorial charges — take costs that the railroad used to bear and forces them onto shippers, Swan says.

Swan argues that it’s not clear the U.S. Class I railroads that have adopted PSR will see the so-called “pivot to growth” experienced at CN and CP.

“Normally in a service business you try to provide some service the customer wants,” Swan says. “Under PSR the railroads provide a service and the customers can take it or leave it to a large extent.”

Dan Sabin, president of the 253-mile Iowa Northern Railway, says the shift to PSR varied at his short line’s Class I connections, CN, CP, and UP.

The Harrison-led efforts at CN and CP resulted in the loss of institutional knowledge as experienced local operating people were replaced or their positions eliminated. CN and CP changed local operating officials frequently, brought in people with no experience, and the railroads became difficult to work with.

CP has a responsive marketing team filled with great people, Sabin says, but its interchange service is unreliable. “Most of our customers refuse to route anything over CP,” he says, although the railway does have sizable oats and chemicals traffic with CP. CN has a condescending attitude, Sabin says, and doesn’t seem to realize the benefits of traffic growth that can come from working closely with short line railroads.

“UP is by far the best,” Sabin says. UP kept its experienced local operating people, slashed bureaucracy at headquarters, and became focused on Iowa Northern’s role in providing first- and last-mile service, he says. UP also communicates well, has assigned a liaison who can get through any department at headquarters within a day, and is now open to suggestions Iowa Northern has made over the years.

“They adopted a lot of their operations to fit what our customers needed and showed an incredible amount of appreciation for what we are doing with them. They are making changes quickly to identify and rectify service issues,” Sabin says.

For example, UP coordinated interchange so that Iowa Northern could deliver its outbound cars and pull inbound cars on the same day, allowing the short line to use one crew for interchange traffic that includes international intermodal containers from Southern California, Sabin says.
Dick, Swan, and Sabin spoke on a panel discussion, “Precision Scheduled Railroading — Class I and Shortline Connection,” at the Midwest Virtual Railroad Conference on Tuesday, hosted by the Michigan Tech Transportation Institute’s Rail Transportation Program.