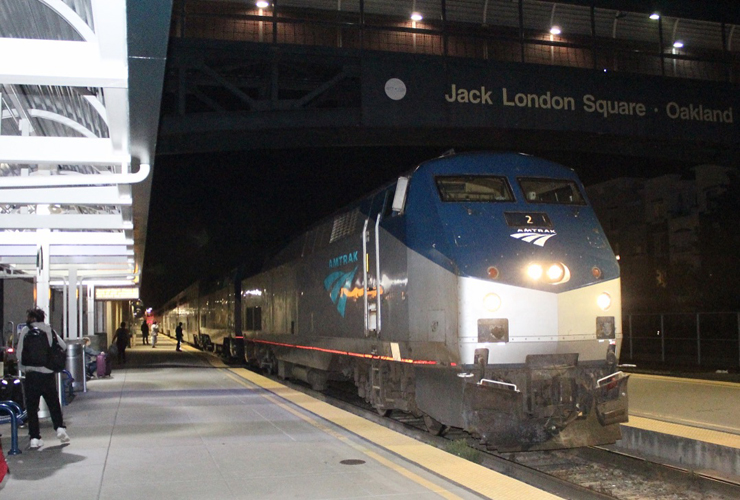 Third in a series

Originally, and ambitiously, the south end of the route was in San Diego.

Evidence the Starlight is still fulfilling its promise swept into Oakland’s Jack London Square station on the evening of Oct. 19, 2020. Although it lacked the long-gone Pacific Parlour Car, the train rated two full sleepers, a dining car, Sightseer lounge, three coaches, and a business class coach bringing up the rear.

That was barely enough. Coach passengers lined up to take the place of those getting off at Oakland. There were similar exchanges at Emeryville, Richmond, and Sacramento, where the passenger load peaked at 183. But there were still 157 on board coming into Klamath Falls, Ore., the next morning, according to the conductor.

Travelers connecting from the westbound California Zephyr to the northbound Starlight are automatically ticketed to endure a noon-to-midnight stopover at Sacramento. But a much better plan for passengers with sleeper space on the Starlight is to leave the Zephyr at the pleasant Martinez, Calif., station served by Capitol Corridor and San Joaquin trains, then take one of those still-frequent services into Oakland’s Jack London Square, where restaurants are plentiful.

Since many people used the sold-out sleeping car roomettes and bedrooms for day travel out of Los Angeles, and the spaces had to be thoroughly refreshed before anyone else could move in, most folks boarding were asked to sit in the adjacent dining car. Fortunately, roomette No. 7’s previous occupant had exited at San Jose, so Vincent, the attendant on Superliner I No. 32009, the George M. Pullman, had the room ready.

It would have been most expedient under the circumstances for him to leave the blanket wrapped in plastic, forcing the passenger into the “do it yourself” ritual that for some reason became the company’s standard operating practice about four years ago. But this 32-year Amtrak veteran’s decision to make the bed properly created an inviting environment.

Not a big deal? Perhaps, when there are so many other transportation challenges. Yet immediately being able to slip between the sheets in the darkened, west-facing room set the stage for an uninterrupted nighttime thrill ride along San Pablo Bay, the Carquinez Strait, and across the towering Suisun Bay drawbridge north of Martinez.

Route guides, maps, and schedules haven’t been provided on Amtrak long-distance trains for several years; travelers must seek them out in advance. The Starlight is no different, but throughout the journey operating personnel pointed out landmarks and continued to update arrival times.

That became more important after the train arrived in Klamath Falls on time but was delayed 45 minutes in leaving. Candidly, crew members explained the positive train control system had failed to initialize, and Union Pacific’s dispatcher belatedly gave permission to proceed. Other PTC-related issues, along with freight-train meets, had the train an hour and a half late by the time it reached Salem, Ore., but schedule padding allowed passengers to make connections to the eastbound Empire Builder at Portland with 15 minutes to spare.

The Coast Starlight’s complete or near sellouts have continued into November. All northbound sleeping car space was unavailable beyond Sacramento on Monday, Nov. 9; only three “flexible”-fare coach seats remained at $181 on Nov. 11 and Nov. 13 from Oakland to Portland; and no roomettes are open for the overnight portion of the southbound trip this Saturday, Nov. 14. As of midday Thursday, only one bedroom could be purchased for that day at $941.

Unlike most other long-distance trains, the Starlight offers customers another option, business class. The assigned Superliner II coach at the rear, now equipped with leather seats, once hosted a children’s playroom and later a video-game arcade on the lower level. Those experimental features have been replaced by accessible seating, and today the cars act as a safety valve for coach sellouts and an alternative to high sleeping-car prices. It’s fitting that they soldier on in a more utilitarian role, helping to provide essential mobility along the route, even if it is only three times per week.

Next: Riding the wintertime Empire Builder