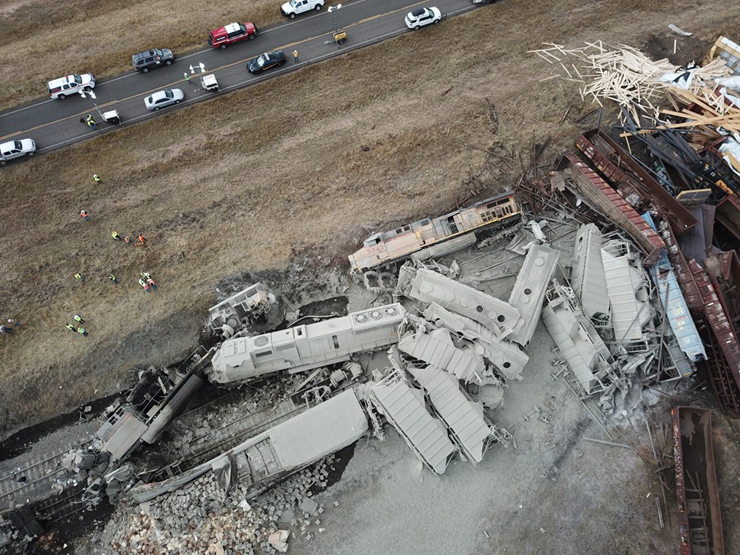 WASHINGTON — A brake system failure — which included an air flow restriction and the failure of an end-of-train device to respond to an emergency brake command — was the probable cause of the October 2018 runaway and subsequent collision that killed two Union Pacific crewmen on Sherman Hill in Wyoming, the National Transportation Safety Board said today.

Contributing factors to the crash at Granite Canyon, Wyo., included UP’s failure to maintain freight cars in accordance with federal regulations, including performing single railcar air brake tests, the safety board said. Also contributing: Federal Railroad Administration and industry standards that allow an extended gap between an end-of-train device communications failure and a warning to the crew.

“Had Union Pacific followed the rules and conducted air brake tests, any defects would likely have been identified and this accident could have been prevented,” Robert Hall, NTSB director of the Office of Railroad, Pipeline and Hazardous Materials Investigations, said in a statement. “This accident is an example of the industry not complying with federal regulations that are already in place to ensure transportation safety.”

The wreck occurred on a 1.55% descending grade on Sherman Hill west of Cheyenne. Eastbound merchandise train MGRCY04 (Green River, Wyo., to Cheyenne) collided with the rear of stationary freight MPCNP03 (Pocatello, Idaho, to North Platte, Neb.), derailing the striking train’s three locomotives and 57 cars, along with eight cars on the parked train.

The runaway continued to accelerate and struck the rear of the standing train at 55 mph, the NTSB said. Killed in the crash were engineer Jason Martinez, 40, and conductor Benjamin Brozovich, 39.

The MGRCY’s brake system operated normally between Green River and Laramie, Wyo., where it picked up 19 additional cars. The brake pipe airflow was restricted between the ninth and 10th cars in the 105-car consist, the NTSB said, meaning that only the brakes on the first nine cars were trying to hold back the train’s 12,417 tons as it headed down the grade.

Because the brake pressure dipped after the train was “bunched” while cresting the grade, it’s possible that a kinked air hose restricted air flow and interfered with normal operation of the brakes, the NTSB said, citing similar incidents. UP’s end-of-railcar air hose assembly inspections did not identify issues that could cause fouling or air flow restrictions, the NTSB said.

Six of the 10 gondolas picked up in Laramie were overdue for a single-car air brake test that likely would have found defective conditions, the NTSB said. UP crews did perform brake tests at Green River and Laramie, the report notes.

The train’s end-of-train device communications failure contributed to the wreck, too, the NTSB said. The devices on the head and rear ends of the train were functioning properly. But a combination of train length, track curvature, and terrain obstructions blocked the radio signal.

Emergency brake commands from the head end cease after 2 minutes if not received by the end of train device, the NTSB said, and there’s also a 16-minute, 30-second lag between a communications failure and a warning to a crew.

“Based on the circumstances of this accident, the NTSB concludes that the communication protocol allowing 16 minutes and 30 seconds of time to elapse without alerting the crew of the inability to initiate emergency braking from the [end-of-train device] is excessive,” the NTSB said.

After the accident, UP installed 26 radio repeaters to provide continuous communications between the head end and rear of trains operating over Sherman Hill’s three tracks.

The NTSB issued new recommendations as a result of the wreck.

It urged the FRA to require more frequent communication checks between the head end and end-of-train devices.

It urged the FRA and the Association of American Railroads to revise codes and standards to ensure that emergency brake signal transmission continues until acknowledged by the end of train device or a brake pressure reduction is noted.

It urged railroads to analyze radio frequency propagation along grades to identify gaps where communication between the head end and rear end may be lost, then to close those gaps.

The NTSB report is available online.