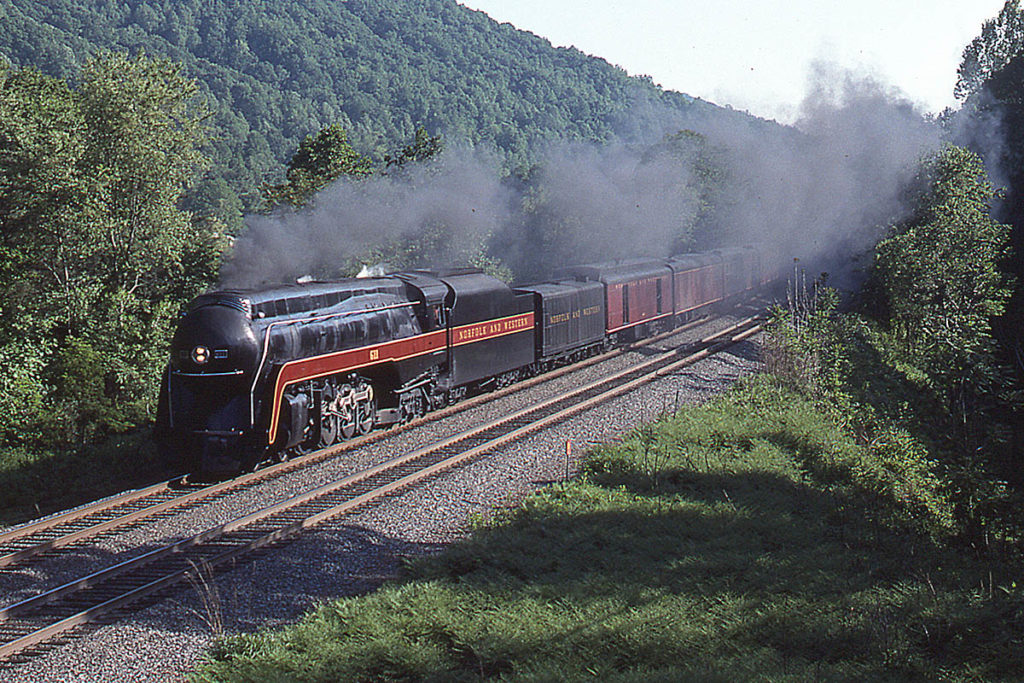 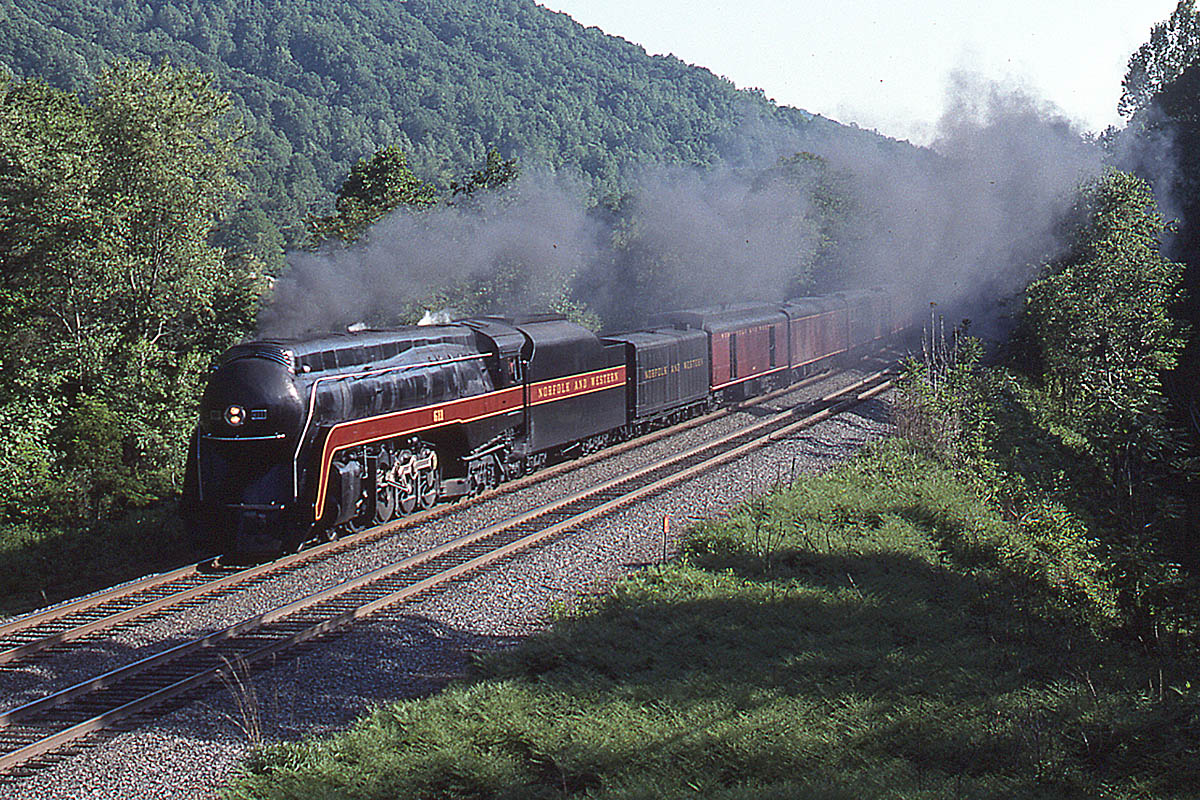 No. 611 on a 1993 excursion near Arrowhead, Va.
Alex Mayes
ROANOKE, Va. – Legendary Norfolk & Western Class J No. 611 will shake off 20 years of inactivity to pull its first mainline passenger train May 30 from its restoration site in Spencer, N.C., to its hometown of Roanoke where a gala celebration awaits the reborn 4-8-4.

Later, you will have 11 opportunities to ride or photograph the Tuscan red streamlined beauty in action on Virginia rails in June and July with departures from Manassas, Lynchburg, and Roanoke, officials with the Virginia Museum of Transportation say.

Trains News Wire has learned that the 2015 Norfolk Southern excursion plans will also be announced soon for the Fort Wayne Railroad Historical Society’s Nickel Plate Road 2-8-4 No. 765, as well as the Tennessee Valley Railroad Museum’s Southern Railway 2-8-2 No. 4501.

The 220-mile, one-way May 30 trip will see the powerful Class J stride along the former Southern Railway main line and enter home rails at Lynchburg. There, the engine will retrace its regular service route when it pulled N&W’s named passenger trains across the fabled Blue Ridge grade. The locomotive is expected to arrive between 2 and 4 p.m., stopping at the O. Winston Link Museum in the former N&W passenger station in downtown Roanoke. The engine is expected to run with no diesel helpers and host NS CEO Wick Moorman and President Jim Squires.

The train will be for invited guests and VIPs and no tickets will be sold. The celebration at the depot will be free and open to the public and additional events will be announced for that weekend, Virginia Museum of Transportation officials say. May 30 is significant because it is 65 years and one day after the engine entered service, and one year after its appearance at the Streamliners at Spencer festival, kicking off the restoration at the North Carolina Transportation Museum in Spencer.
The first opportunity for the public to ride behind No. 611 will come the following weekend with excursions between Manassas and Riverton Junction, a 102-mile roundtrip on former Southern Railway tracks. A morning trip will take place June 6 and both morning and afternoon trips will take place June 7. This takes place during the 21st annual Manassas Heritage Railway Festival. The following weekend, June 13 and 14, the engine will pull 260-mile round trip excursions between Lynchburg and Petersburg.

Independence Day weekend will see No. 611 running July 3, 4, and 5 from its hometown. Each day it will pull morning trips from Roanoke to Lynchburg, a 98-mile roundtrip, and each afternoon it will pull a 84-mile roundtrip to Walton and back. The afternoon trips send the locomotive across famed Christiansburg grade.

Donors to the Fire Up 611! Campaign will receive ticket ordering information by mail and tickets will go on sale to the general public May 6. More information will be available soon at www.fireup611.org.

The Class J locomotive was built at Roanoke in 1950 as one of 14. It operated in revenue service until 1959. No. 611 was placed on display in Roanoke’s Wasena Park, was restored in 1981, and began a second career pulling excursions in 1982. That ended in 1994 and the current Fire Up 611! campaign is responsible for the locomotive’s 2015 return to service.

The Virginia Museum of Transportation launched a study on the 611’s restoration in 2013 and concluded that $3.5 million was needed to restore, operate, and house the locomotive and another $1.5 million would be needed for an endowment. Contributions to date have totaled more than $3 million from across the U.S. and 19 countries. The museum continues to raise funds for an on-campus shop and education facility, and hopes to break ground on the building in summer 2015.

Donations to the Fire Up 611! Campaign can be made through www.fireup611.org.

Trains Magazine will cover No. 611 with its live streaming webcam, a feature in the August issue, and a special 76-page magazine, 611 in Steam and a companion DVD by the same name, available in July and October, respectively.

9 thoughts on “Norfolk & Western No. 611 inaugural run set for May 30; excursions in June and July NEWSWIRE”