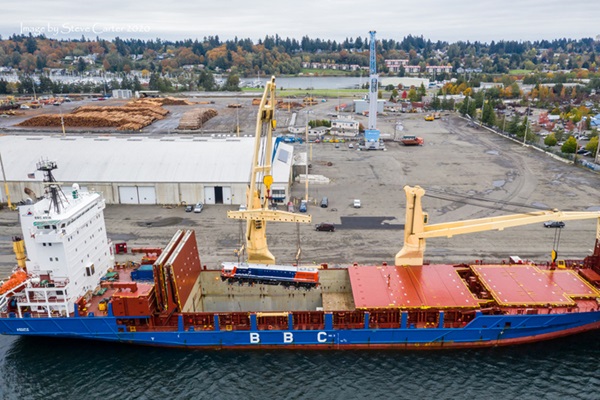 With those complete, Tacoma Rail moved the locomotives from the Progress Rail facility to BNSF, which delivered them to short line Olympia & Belmore, a 5-mile Genesee & Wyoming property which connects the Port of Olympia to the national rail network, operating under contract to the Puget Sound & Pacific on Union Pacific-owned right-of-way. The locomotives were moved the final few hundred feet by a port-owned Shuttlewagon, then were lifted by crane into the hold of the general cargo ship BBC Asia.

A few hours later, the ship set sail. Its circuitous route out of the south Puget Sound, weaving through inlets and around islands and points, invites the question: Why the Port of Olympia?  Why not Tacoma or Everett, both closer and with facilities to hand track to dock loading? The reason is simple: price