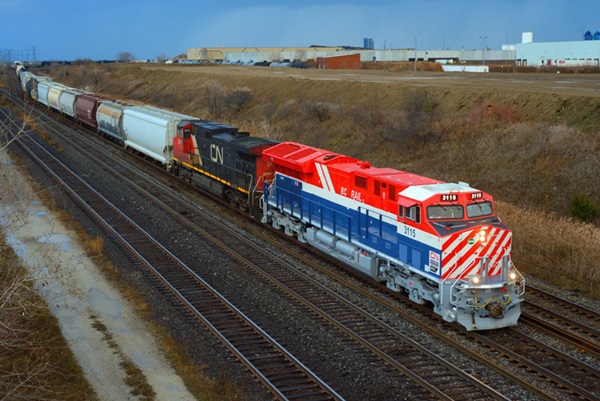 The first Canadian National heritage unit to lead a train departs Toronto’s Macmillan Yard on Sunday on Train X376. ET44AC No. 3115 is painted in the red, white, and blue BC Rail “hockey stick” paint scheme. CN is commemorating the 25th anniversary of its initial public offering marking the company’s privatization, ending its status as a crown corporation under government control, as noted by the “IPO25” decal near the front. Other units known to have been painted in heritage schemes honor Grand Trunk (No. 8952); Elgin, Joliet & Eastern (3023), Wisconsin Central (3069), and Illinois Central (3008). Also, a GP40-3 and slug set, rebuilt by Progress Rail and numbered 7600/600, has been repainted in the pre-1961 CN green and gold paint scheme.
You must login to submit a comment
Related Articles