Pueblo, Colo., facility plans for more than 20 miles of tracks 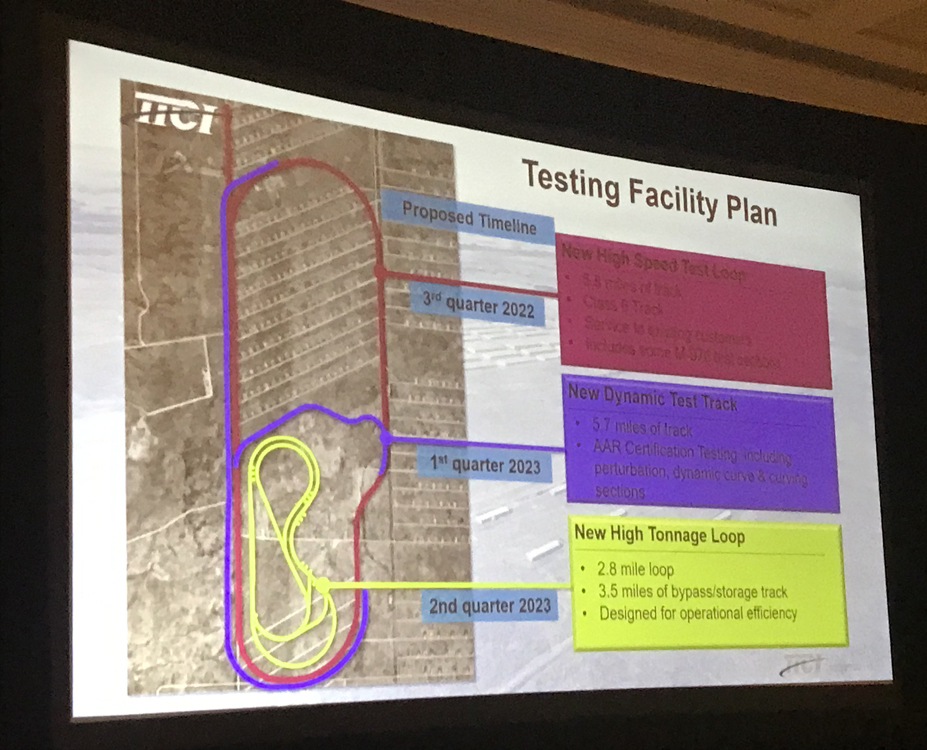 PHOENIX — TTCI Inc., the AAR-affiliated research, testing, and training operation, should have the first test tracks at its new PuebloPlex facility in Colorado operating by this October, CEO Kari Gonzales said Saturday at the National Railroad Construction & Maintenance Association Conference.

TTCI is being displaced from its longtime home at the Federal Railroad Administration’s Transportation Technology Center in Pueblo after the U.S. Department of Transportatiion awarded the contract for the facility to transportation, defense, and intelligence firm ENSCO [see “Digest: Developer’s agreement with Metra …,” Trains News Wire, March 10, 2021]. It is building a new test facility about 10 miles away at PuebloPlex, on land from the former U.S. Army Pueblo Chemical Depot. Its headquarters and labs relocate to the Pueblo Industrial Park. Gonzales was on hand in part to inform NRC contractors of construction possibilities at the new test facility.

That test complex will cover about 1,200 acres, compared to the current sprawling facility. “When you’re operating a 52-square-mile facility that isn’t highly utilized, you have high overhead,” Gonzales said. “With this opportunity to change the way we work, we didn’t go out to try to replicate what’s at the TTC. There’s no need for it. That infrastructure is there, we’ll figure out how to leverage it when we need to.”

Instead, the new facility will have a 5.8-mile high speed loop, with a top speed of 110 mph (compared to TTC’s 160-mph capability); a 5.7-mile dynamic test track, for AAR certification testing, and a 2.8-mile high-tonnage loop, with 3.5 miles of bypass and storage tracks. The high-speed loop is planned for completion first, with the dynamic test track to be ready in the first quarter of 2023 and the high-tonnage loop the following quarter.

The PuebloPlex facility will also include a new version of the Security and Emergency Response Training Center hazmat facility, as well as maintenance and machine and welding. Those will take advantage of existing structures.

PuebloPlex will eventually cover up to 16,000 acres, as the Army releases land from the former chemical facility.”So there’s an opportunity to expand, based on needs,” Gonzales said. The facility already includes some manufacturing and distributing firms, along with short line railroad service for more than 40 miles of existing track (not all of it in service). The TTCI test facilities will use newly built track, however.

A BNSF Railway spur serves the complex, and offers a direct route to move locomotives, rolling stock, and other materials from the current location to the new facility. “It is going to be a chore,” Gonzales said, “which is why we’ve already started this process.” An example of the challenges: the move will include a number of bridges used for research at the TTC.

“The bridges that are at the current facility are owned by the industry; they were donated,” Gonzales said. “So we will be taking those with us. The question really was, do we take those and just put them back in, or do we redesign the program for some of the concerns we have today. So what you’re going to see is a revamped bridge program. The initial build will not have the bridges in, but you will see them introduced within the first year or two.”