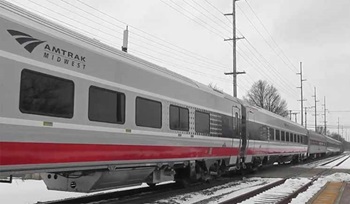 NILES, Mich. – The new Siemens Venture cars for Amtrak Midwest service made their first test run on Monday, operating from Chicago to Pontiac, Mich., on the schedule of Wolverine Service train No. 350, suspended since March because of the COVID-19 pandemic. The trainset, with four of the new coaches separated by former heritage sleeper Pacific Bend, carrying test equipment and personnel. The train is scheduled to return to Chicago on Tuesday. The single-level cars, based on those built for Florida’s Brightline, are part of a 137-car order – 88 for the Midwest and 49 for California – announced in 2017 as a replacement for a Nippon-Sharyo order for bilevel cars cancelled when that manufacturer was unable to create a prototype capable of passing a key safety test [see “Expensive questions surface with changed passenger car order,” Trains News Wire, Nov. 9, 2017]. The first of the cars were delivered to Chicago in August.