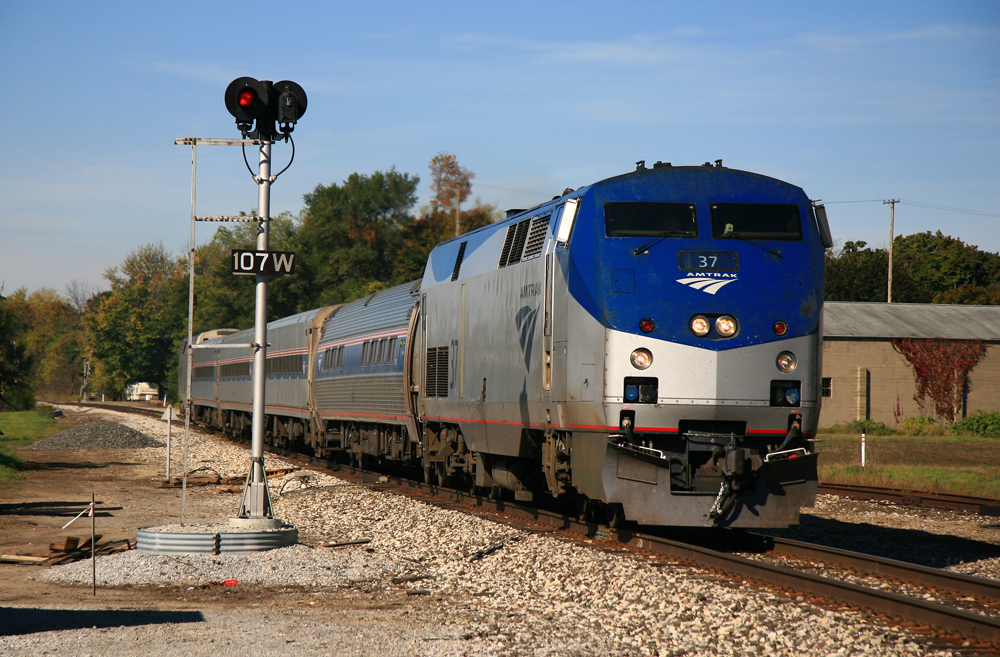 LANSING, Mich. — Maximum speeds for Amtrak trains on one segment of the Chicago-Pontiac, Mich., corridor will increase to 110 mph as of Tuesday, May 25, and that corridor will see an additional round trip beginning July 19.

The higher speed limit will come on 45 miles of state-owned tracks between Kalamazoo and Albion, Mich., following the completion of required Federal Railroad Administration certification of the signal system. They will take advantage of infrastructure upgrades that have been in place for several years. Substantial right-of-way and track modifications remain to be completed on another 87 state-owned miles east of Albion to Dearborn, Mich., before speeds can be raised there. As a result, the scheduled travel times between Chicago and Pontiac remain unchanged, but a press release says the state “expects to see on-time performance improve thanks to higher speeds allowing trains to recover from potential delays elsewhere on the route.”

Since 2012, speeds up to 110 mph have been authorized on about 100 miles of Amtrak-owned track between Porter, Ind., and Kalamazoo, utilizing Incremental Train Control System (ITCS) signaling as a “vital” system. After the state purchased the Kalamazoo-Dearborn route from Norfolk Southern, Amtrak began dispatching it and various train control options were evaluated. The FRA eventually approved a plan to continue to use ITCS for passenger trains on the new section as an overlay to the interoperable I-ETMS positive train control system. Doing so meant NS freight trains exercising trackage rights east of Kalamazoo would not need the ITCS system. Testing of the first-of-its-kind installation took more than two years, but is now complete.

Nevertheless, some notable slow zones remain in the higher-speed section, including a mile of track shared with Canadian National through downtown Battle Creek and a sweeping curve through Galesburg, Mich.

The Chicago-Pontiac corridor will continue to host only one daily round trip until the July 19 addition of morning eastbound train 350 and evening westbound train 355. Although morning Wolverine No. 351 will continue to operate into Chicago, the current afternoon departure of No. 352, leaving Chicago at 1:25 p.m., will be dropped in favor of No. 354, departing at 5:50 p.m. No. 352, which arrives in Detroit at 7:51 p.m. has often been sold out. No. 354 won’t arrive in Detroit until 11:54 p.m., but will enable Michigan-bound passengers to connect at Chicago from Amtrak’s long-distance trains and more Midwest routes.

The additional frequencies will still leave the route short of its pre-pandemic service of three daily round trips, but the Michigan Department of Transportation says, “As travel demands increase and COVID-19 vaccination rates rise in Michigan, Amtrak and MDOT will examine restoring the third round trip.”

Michigan’s move comes well after other corridors, such as the Chicago-Milwaukee Hiawathas, North Carolina’s Raleigh-Charlotte Piedmonts, and the Boston to Brunswick, Maine, Downeaster have restored frequencies to pre-pandemic levels.

One thought on “Michigan Amtrak speeds increase; second Wolverine round trip to be added in July”