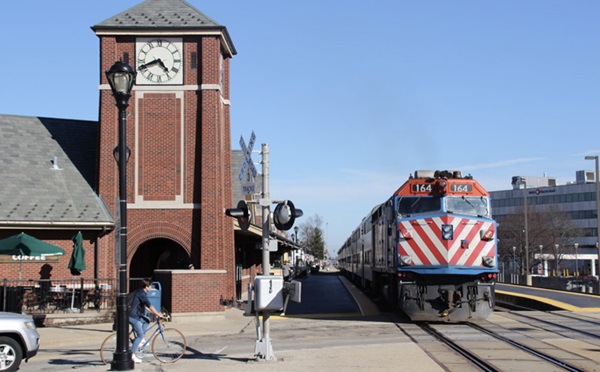 CHICAGO — The schedules that Metra ran before the COVID-19 pandemic are likely gone for good, Executive Director and CEO Jim Derwinski says, and the process of determining the nature of service that takes the place of those schedules will likely take some time.

“We have a core belief that our old schedules mostly won’t come back the way they were. They’re going to evolve,” Derwinski told Northwestern University’s Sandhouse Rail Group during an online event Tuesday. The new schedules, he said, will seek to address the needs of riders in the new landscape. “What are the riders doing? Where are they showing up? Where are they not showing up? … It’s going to be very dynamic the next couple of years.”

An emphasis on service during the traditional morning and evening rush hours will likely remain.

“Trains may be shorter, they may not be as frequent, but definitely [will address] the things that people want — express trains from where they’re at, the busiest stations downtown, that sort of thing,” Derwinski said. The big changes, though, are likely to come outside of those windows; Derwinski says he foresees more midday and weekend trains.

“We’d love to start experimenting,” he says, “and I’m trying to work with one of our partners to try something that I’ll call regional rail, where trains are much more frequent. Maybe they’re every half-hour, and during rush hour, every 15 minutes. It lets people know there’s always going to be a train to come — not as fast as rapid transit, but definitely more enhanced than the one- or two-hour windows we have now.”

While Metra currently has reduced weekend operations, running Sunday schedules on both Saturdays and Sundays, the CEO says Metra will increase that “when the time is right.” And even before the pandemic, the commuter railroad saw signs that more weekend service could be fruitful.

“That was where we were starting to see the best ridership growth pre-COVID,” he says, recalling a pilot program on the Union Pacific Northwest line in summer 2019. “We added about 10 extra trains on Saturdays and Sundays; we saw a 30% growth. And that’s because that [lower] frequency of service was an impediment, we believe,” to people choosing to use the train on weekends.

The challenge to additional service on most lines, of course, will be that Metra shares most of its lines with freight operations, which can limit its scheduling options. Still, Derwinski says, “Absolutely, I see us enhancing, where we can, midday service, and where we can, weekend service.”

— The purchase of at least 200 and up to 500 new bilevel coaches from Alstom [see “Metra board approves order …,” Trains News Wire, Jan. 14, 2021]. One key factor in was that the Alstom cab cars allow passengers to walk through to adjoining cars. Smaller midday trainsets are sometimes combined to create longer rush-hour trains, which can place a cab car in the middle of train. “This was a critical component to us,” he said. “We didn’t want to have cab cars isolated at the end of the train, which didn’t allow us flexibility in operations.” Also significant, he said, were that Alstom offered a six-year warranty on its cars, while other bidders only offered the three-year warranty required in the procurement specifications, and that the cars are stainless steel. “We look at 1950s cars built out of stainless steel and see how that’s held up over the years. We look at our carbon steel cars and see issues; we know people with aluminum body cars, and we see issues. So we love the fact that these cars are stainless steel.” The initial order calls for 30 cab cars and 170 trailers, although those numbers could change, he said.

— The possibility that Metra could acquire more cars from Northern California’s Caltrain when that commuter agency completes its conversion to electrified service, currently slated for 2022. Metra has a right of first refusal to purchase up to 50 cars from Caltrain, Derwinski said. Such a move would have a couple of drawbacks, he said. One is that the cars, which he recalled as being of 1990 to 1996 vintage, have never been overhauled. Metra aims to overhaul cars every 16 years; it has some cars beyond that figure but they are scheduled to be retired. “If we bring the cars in from California, they have two distinct things they’re going to need. One is an overhaul. … The other is that they have a completely different braking system. So either we’re going to have to spend some money to standardize the system, or we’d have to run them in unique, different areas.”

— Plans for a March 11, invitation-only event involving human resources officials and C-suite leaders from companies in Chicago’s central business district, to outline how business riders can safely return to Metra. “It seems like the biggest impediment to people coming back downtown is their employers, which is why we’re having the March 11 event,” he said. The goal is to tell executives and HR departments, “When your people are ready to come back downtown, this is what Metra is ready to do.” This is a follow-up of sorts to a September press conference in which 31 media members were invited to Metra’s Western Avenue yard and shops to see cleaning procedures, which generated a good deal of news coverage. “The next two weeks, week over week, we had a 10% rise in ridership,” Derwinski said. A rise in COVID cases, however, led to a decline thereafter.