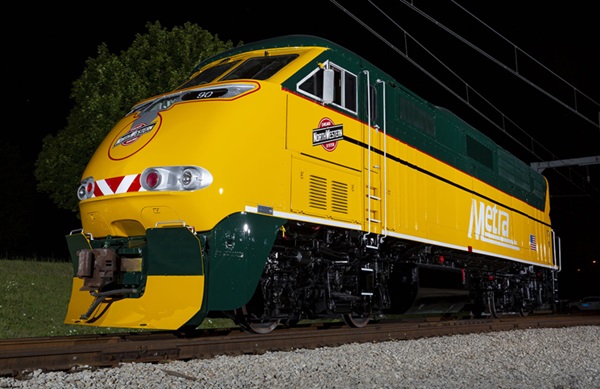 Metra C&NW heritage unit debuts
Chicago commuter railroad Metra has unveiled its latest heritage locomotive. Metra F59PHI No. 90 was released Monday from the company’s paint booth in a Chicago & North Western-inspired scheme. The design incorporates elements of C&NW’s paint scheme worn on early passenger diesel locomotives such as EMD’s E6, Alco’s DL-109, and Fairbanks-Morse “Erie Built” units. METX No. 90 is the first of Metra’s 21 F59PHI’s to be selected for a heritage paint scheme.

Previous heritage units include F40PHM-2 No. 211, honoring the Chicago, Burlington and Quincy, released in October 2019; MP36 No. 405, released in early 2019 in Milwaukee Road-inspired paint; and Chicago, Rock Island & Pacific-inspired MP36 No. 425, which debuted in January 2018. Locomotive No. 425 was repainted to honor Metra’s outgoing CEO, Don Orseno, who began his career on the Rock Island Railroad in 1974.

METX No. 90 was moved from Metra’s KYD shop to Joliet Monday night for forwarding to downtown Chicago today. After transfer to Metra’s Union Pacific operations, the locomotive will receive minor mechanical work and inspection before being released for revenue service.

Great Lakes Central acquires SD35s
Michigan-based Great Lakes Central has acquired all three of Montana Rail Link’s remaining SD35s. The Michigan railroad is well known for its fleet of six former Ann Arbor GP35s which still operate on original Ann Arbor trackage, though only three are operational currently. The SD35s, MRL Nos. 701, 702 and 705, are currently in the Chicago area, interchanging from BNSF to CN for final delivery. GLC plans to renumber the SD35s as Nos. 383, 384 and 386. The railroad hopes to get No. 383 (the former No. 705) in revenue service shortly after delivery. Nos. 384 and 386 will follow after light repairs are performed. All three SD35s were built for Norfolk & Western in 1965.

IHB adds comfort-cab locomotives
Indiana Harbor Belt has begun delivery on its latest locomotives from Metro East Industries in East St. Louis, Ill., in the form of three former Canadian National GP40-2Ls. IHB traded in its remaining three SD20s, Nos. 2920, 2923, and 2924,for the three GP40-2Ls. These locomotives were built for Canadian National in the 1970s with comfort cabs and lighter frames than traditional GP40-2s. IHB GP40-2L No. 4020 has arrived in Chicago and is in the process of being set up by the railroad. IHB Nos. 4021 and 4022 have yet to arrive.