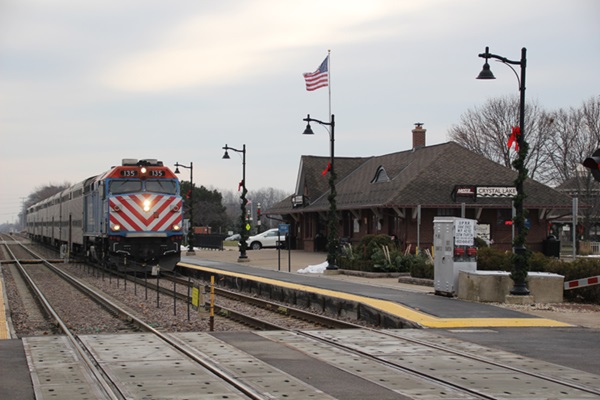 CHICAGO — Metra has sued Union Pacific for breach of contract over its fare collection policies on the three Metra lines operated by UP, saying an “arbitrary and capricious” refusal to deploy conductors is severely damaging Metra’s bottom line, reputation, and customer experience.

In a response Wednesday afternoon, Union Pacific said it is “is unwilling to put fare collection ahead of employee and commuter health and safety during a global pandemic, and we are prepared to vigorously defend ourselves in court.”

The suit filed Wednesday in Cook County Circuit Court asks for monetary damages and a permanent injunction requiring UP conductors and onboard personnel resume all required duties, which include selling and validating tickets and passing through passenger cars to assist customers and promote orderly conduct.

“We strongly disagree with how Union Pacific Railroad has been operating commuter service,” Metra CEO/Executive Director Jim Derwinski said in a press release. “We have given UP management numerous opportunities to provide the necessary level of service as on our other lines, but they have refused to address these issues in any meaningful way and have left us no recourse but to seek relief through the courts.”

Metra stopped fare collection on all lines in the early stages of the COVID-19 pandemic, but it was resumed on Metra- and BNSF-operated lines in June. Union Pacific did not resume fare collection until it began checking tickets for inbound and outbound passengers at the downtown Ogilvie Transportation Center on Oct. 5, but is not checking tickets onboard, citing the death of two employees and pandemic-related health concerns. [see “Union Pacific plan to collect fares met with concern by Metra,” Trains News Wire, Oct. 2, 2020]. Before that plan went into effect, Metra made it clear it disagreed with the policy and, foreshadowing the lawsuit, said it was continuing to “consider its options to compel UP to fulfill its contractual obligations.”

In its press release announcing the lawsuit, Metra said UP’s plan at the Ogilvie station was enacted without its consent, and that it had told Union Pacific the plan was “unsafe, unfeasible, and ineffective and was not a substitute for abiding by the terms” of the Purchase of Service Agreement, which governs UP’s operation of Metra service. Metra says it believes the cost of paying UP to staff those booths may exceed the amount of the fare collected.

In addition to seeking lost revenue, Metra says it has heard from passengers who feel the lack of conductors has made the trains less safe. And its lawsuit quotes from a Union Pacific operations bulletin dated Jan. 1, 2020, which calls it “critically important” that crew members regularly pass through cars “to detect and observe medical emergencies, passengers needing assistance and information, the general orderly conduct of a train, and fare colletion.”

“This is about our riders,” Derwinski said in the release. “There is absolutely nothing more important than providing them with timely and safe transportation. We will continue to fight on their behalf.”

UP’s response says, “There is no one-size-fits-all approach to managing fare collection during a pandemic,” and cited transit agencies are not collecting fares, placing plexiglass barriers between passengers and operators, and using conductors in roles that do not require ticket sales. “Last week, Union Pacific implemented a ticket sales and verification process that puts health and safety first, while providing an opportunity to increase fare collection at a time when ridership is down 90% across all of Metra’s lines. The process is working well.”

The railroad says safety is its priority: “We want Chicago commuters to feel safe and confident as they return to riding trains, and our employees must feel the same … We will continue to use an abundance of caution, while following guidance from our company’s medical team, CDC, City of Chicago and the governor on best practices related to COVID-19.”

As it did in announcing its fare collection policy, the railroad said it has “repeatedly asked Metra to increase its police presence” on trains to address safety concerns as well as the enforcement of ticketing and mask requirements.

The lawsuit comes when the two sides are already in court over Union Pacific’s effort to end its operation of its West, Northwest, and North commuter lines [see “Judge denies Metra motion to dismiss UP suit over commuter operations,” News Wire, Aug. 28, 2020]. Union Pacific wants Metra to operate and staff the trains while Union Pacific maintains dispatching control of its lines.

The Metra suit filed Wednesday makes note of that suit but also says UP has breached the provisions of the most recent contract extension under which commuter service continues.

UP notes the current contract expires Dec. 31, and that the railroad “has worked diligently with Metra over the last 15 months to find an agreeable solution for a seamless services transfer upon expiration of the contract … and we have repeatedly offered solutions that benefit Chicago commuters and Metra.”