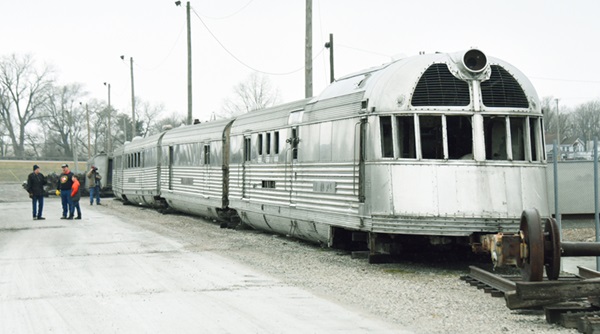 TREGO, Wis. — The opportunity may be coming to travel to Northwest Wisconsin and ride one of the first diesel-powered streamlined passenger trains.

In a Trains News Wire exclusive, the Wisconsin Great Northern Railroad has announced it has purchased the Mark Twain Zephyr, one of nine trainsets built by Philadelphia’s Budd Co. for the Chicago, Burlington & Quincy in 1934.

The shovelnose locomotive and three-car articulated trainset, along with an extra car, are in the process of being trucked to WGN’s Trego yards where the train will undergo a full restoration to operating condition.

The Mark Twain Zephyr has been through four owners, all of whom said the train would be restored, but no work has been done on the trainset. It has been stored at several Midwest locations, mostly in Illinois.

The train’s trucks have already been delivered to Trego, with power car No. 9903, the Injun Joe, to be shipped from Gateway Rail Service in Madison, Ill., this week. Originally powered by a 600-hp, eight-cylinder Winton diesel engine, the 9903 will be first and most complex part of the restoration and repowering project.

The trainset has mostly been mostly gutted, and no longer has the Winton engine, but Wisconsin Great Northern President Greg Vreeland has a plan for the storied train.

“Our CNW-painted No. 1280 [an SW600] will be donating its EMD 600-hp 6-567 C engine to the ‘Injun Joe,’” Vreeland says. “I’ve already taken measurements and I know it will fit with some modifications and fabrication of some steel parts.’’

Several other components from No. 1280 will be used in the 9903, including the control stand and generator.

The second car in the train, baggage car No. 506, Becky Thatcher, will be rebuilt to include a historical walk-through interpretation of the Zephyr program.

The third car is No. 551, dining car Huckleberry Finn. Plans are restore it to be a a full-service dining car, with the interior modeled after the 1936 Denver Zephyr.

Plans for boat-tail observation lounge-parlor car No. 573, the Tom Sawyer, include first-class seating, with low-back chairs to enable passengers to enjoy the view.

An extra car that was originally part of the Pioneer Zephyr, 1938-built dinette-coach carNo. 500, the Effie Dean, will be transformed into a tavern lounge. This car was included in the Burlington’s 1962 sale of the trainset because Chicago’s Museum of Science and Industry, which purchased and displays the Pioneer Zephyr, did not have room for the entire train.

“We have done a ton of research,” Vreeland says. “We are going to give it every bit of Zephyr flavor as we can, using Zephyr floor plans and interior colors and decoration that befits the Zephyr period.”

For more information and to track the restoration process, visit the Mark Twain Zephyr website and Facebook page.