Restoration of engines 4 and 8 will increase capacity, reliability 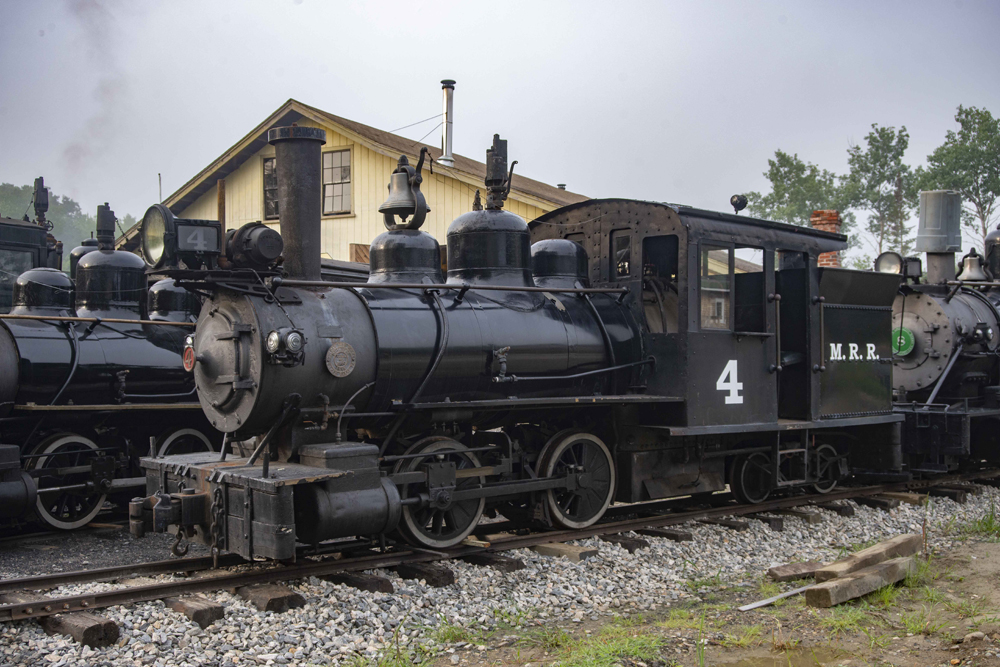 PORTLAND, Maine – Looking to the future, the Maine Narrow Gauge Railroad Co. and Museum plans to restore two more of its 2-foot gauge steam locomotives to operating condition, in addition to two currently in service.

The announcement was made at the Wiscasset, Waterville & Farmington Railway Museum’s summer picnic earlier this month, where two Maine Narrow Gauge 2-foot steamers and one belonging to the WW&F put on a show, running eight trains that day.

Maine Narrow Gauge and WW&F routinely partner, along with Maine Locomotive & Machine Works, to rotate their equipment among sites. MNG operates a 1½-mile waterfront line with a terminus in downtown Portland, while WW&F is based 50 miles north in rural Alna, Maine, running over 3.3 miles of original WW&F right-of-way. Between 1879 and 1943, Maine was uniquely the home to five common-carrier 2-foot-gauge railroads, and counted some 200 miles of such lines.

Both engines need new boilers, which were last replaced at a previous  heritage site, the Edaville Railroad in Massachusetts, Mencis says. “They (Edaville) had them replaced in the ’70s or early ’80s, but they need a lot of work to be brought back up to [Federal Railroad Administration] code.

“New boilers for both locomotives will ensure them operating longer and better for the museum. It’s probably the more cost-efficient way [rather than making repairs]. They’re just worn out.”

Several years ago, MNG lost its museum display building in Portland to development. With it went the ability to house its historic collection of rolling stock that was a prime attraction. Much of that equipment has been moved to covered protection at Alna, as the Wiscasset, Waterville & Farmington website explains.

With the relocation of those assets, Mencis says, “We want to make sure we live up to the mission of showing off the equipment (here), operating the equipment, and using it as a tool to teach people.”

“We need [these engines] to be that historical presence in Portland.  Running the [museum’s General Electric] diesel is great – the diesel looks nice, it’s pretty – but it doesn’t give the same feel as a steam engine.”

When the public sees MNG’s diesel, Mencis says, “The No. 1 question we get is, ‘Oh, this thing runs?’ But when they see the steam engine, that’s alive and they say, ‘That’s a steam engine.’ Steam is an important aspect.”

Another factor is that ridership is expected to rise when the COVID pandemic eases and bus tours for New England fall colors resume. “We wanted to figure out a plan to have steam any time a cruise ship is in town,” Mencis says. When that happens, he said, “it would mean almost running a steam engine every day of the month of September. So it’s a good plan to have all four in operation.”

Of the two engines tabbed for restoration, he says, Monson No. 4 will be the easier, because “the museum in past years has done good running gear work on 4. It just needs the boiler; the running gear is almost set to go.”

By contrast, he says, Bridgton & Saco River No. 8 “is a complete rebuild, boiler and running gear, and it will take a little more time.” Also, that engine is the largest of the surviving Maine 2-footers, he noted.

“It’s a 40-ton locomotive,” he says. Considering engines alone and not a tender, “it’s the same size as some of the Rio Grande 3-foot gauge 2-8-0s.” By contrast, Maine Narrow Gauge’s operable Monson No. 3 weighs 13 tons.

Having more locomotives serviceable makes it easier to rotate the engines in and out of the schedule, Mencis says: “If one goes down, we can keep going” without a hitch.

Improvements to the Maine Narrow Gauge website and signage are planned to make it easy to donate to the campaign to restore engines 4 and 8, including the use of a QR code to allow digital-based contributions by cell phone.

More information is available at the websites of Maine Narrow Gauge, the Wiscasset, Waterville & Farmington, and Maine Locomotive & Machine Works.