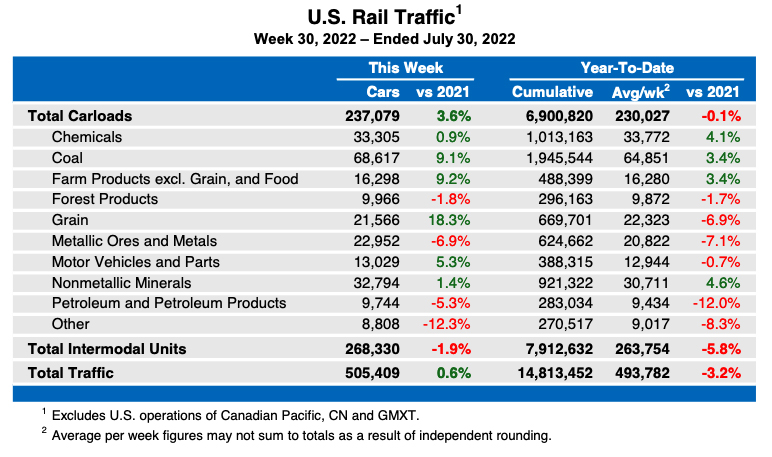 WASHINGTON — U.S. rail traffic remained below 2021 levels, although by a decreasing margin, during July, with overall traffic showing a 1.5% decrease.

Statistics from the Association of American railroads show U.S. railroads originated 906,903 carloads for the month, up 0.2% from July 2021, while intermodal traffic of 1,033,906 carloads represented a 3% decline. In total, railroads moved 1,940,809 carloads and intermodal units.

The overall figure of 1.5% is the smallest monthly decline compared to 2021 since February, when traffic showed a 5.7% increase, mostly because severe weather interfered with rail traffic in February 2021. It marked the third straight month the amount of decline had decreased, after traffic was down by 5.8% in April, 4% in May, and 3.2% in June.

“Rail traffic in July was evenly balanced between commodities with carload gains and those with carload declines,” AAR Senior Vice President John T. Gray said in a press release. “As such, it does not provide definitive evidence regarding the state of the overall economy. In that respect, it is very similar to most other recent economic indicators.”

For the year to date, carload traffic is down 0.1%, intermodal volume is down 5.8%, and total traffic has decreased by 3.2%.

Traffic up for week ending July 30