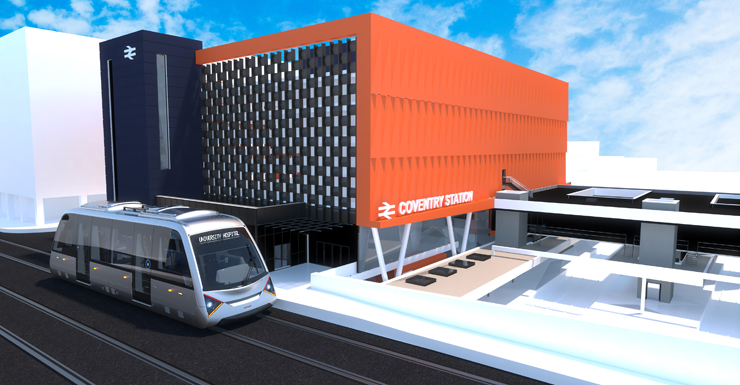 Development work is nearing completion in central England for a prototype Very Light Rail system drawing on design and component expertise from the auto industry. The project aims to build an autonomous rail-based streetcar system in the British city of Coventry by 2024, which along with nearby Birmingham is one of the main centers of the UK auto industry, Marques such as Jaguar and Land Rover are made locally.

Coventry wants a light rail system to reduce the number of cars and buses on its streets but decided it could not afford a conventional system due to the high construction costs for both track and vehicles. The Very Light Rail system aims to offer the benefits of a conventional streetcar line for a small city like Coventry, but without the cost. Very Light Rail has been defined by its designers as less than one metric tonne of vehicle weight per linear meter of the vehicle (in U.S. terms, think one ton per yard, although the conversion is not exactly equivalent).

Plans are for the first route to be double track and around 9 miles long, using a fleet of 20 VLR cars, each able to carry around 70 people (20 seated). The VLR cars, weighing no more than 17.6 short tons (16 metric tonnes) fully laden, will be battery-powered using lithium titanate batteries, chosen as the most stable and safest lithium battery. The VLR cars will recharge their batteries at the end of each trip using an overhead charger system already widely used in Europe for electric buses; the recharge process will take no longer than 2 or 3 minutes.

Low cost and lightweight
The designers, some from Warwick University’s Warwick Manufacturing Group that works closely with the auto industry and who created the VLR concept, are looking to exploit technology that is available to the auto industry for rail use. Not only is this proven technology, it is mass produced and so therefore relatively cheap — unlike most technology used in trains and conventional streetcars which is normally bespoke and expensive.

Building a lightweight vehicle is one thing, but offering a lightweight system is another. The Coventry system will use a newly patented lightweight track system that is designed to be laid in pre-manufactured sections in a shallow trench cut into the roads. The designers are aiming for track sections no more than 300 millimeters deep (just under 12 inches) which can be inserted into trenches cut in roads using standard road maintenance milling machines. The depth matters as, in the UK at least, all utility pipes and cables have to be buried at least 450 mm (1 foot, 6 inches) deep under roads; keeping track depth to 300 mm means there is no need for expensive and disruptive utility diversions before track can be laid. Such diversion work for pipes and cables can take up more than 10% of total construction costs for new conventional streetcar lines. And if, in the future, the utility companies need emergency access, the track panels could be craned out of place relatively quickly to allow overnight repairs. The designers are looking to reduce construction costs from around $110 million per mile to just $22 million by using this system.

Autonomous operation a goal
While autonomous self-driving cars have been tested on roads, most observers see their introduction taking a long while, possibly decades. But the VLR designers think the basic technology can be applied more quickly to rail-based vehicles — as crucially, unlike cars, they have rails to guide them, and other road users will know they stick to the rails and not make sudden turns, etc. In many cities, streetcars already share road space with other vehicles, so this in itself is not a new idea. Autonomous operation in Coventry is unlikely on day one, so the first VLR cars will have human drivers, but the aim will be to transition to fully autonomous operation by 2030.

National test center
A test center for the new VLR streetcar and a separate project — the similar but slightly heavier “Revolution” VLR diesel-battery hybrid railcar, designed to operate on lightly used parts of the mainline rail system — is being built in Dudley near Birmingham. The prototype Coventry VLR car is scheduled to begin test running there within weeks.

As well as being used to prove the VLR technology for the Coventry system, the new VLR National Innovation Centre will also use a refurbished section of previously out-of-use railway to test the Revolution train. The designers of both the VLR system and Revolution hope to sell both designs not only in Britain but around the world in the coming decade.