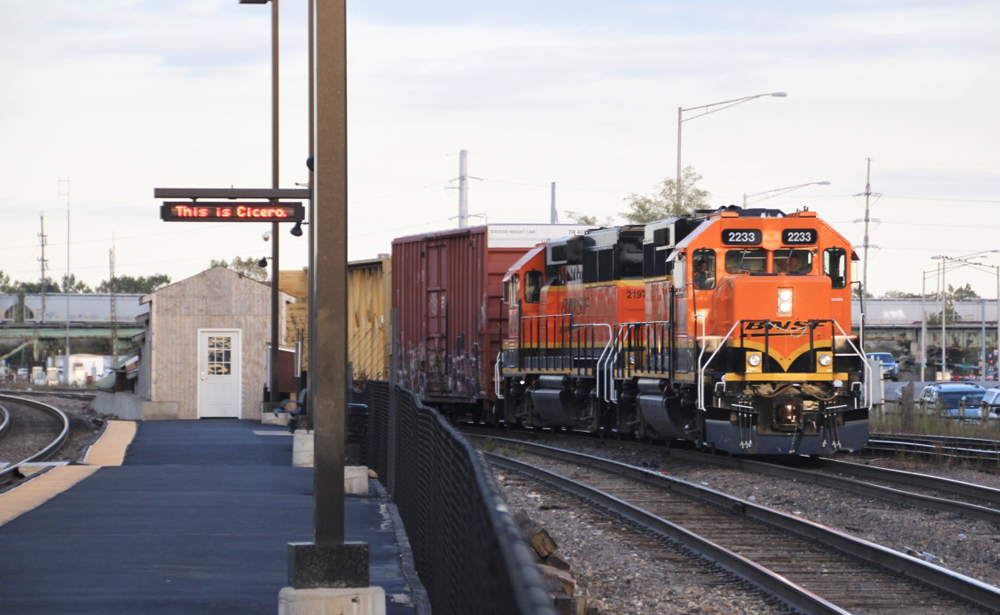 CICERO, Ill. — The Town of Cicero is suing BNSF Railway, which operates a major intermodal rail yard in the facility, claiming the railroad has intentionally acted to ensure rainwater runs off its property into the community — after the railroad sued the city over a stormwater ordinance the railroad says is “discriminatory and unlawful.”

The Cicero suit, filed July 13 in Cook County Circuit Court, says the railroad has raised the ground level and paved areas that were previously dirt at its Cicero yard, which covers more than 250 acres and is the city’s largest privately owned parcel of land. The result, the suit says, has been increased flooding and stress on the town’s stormwater drainage system. It seeks a ruling ordering BNSF to built detention ponds or other drainage systems to address the water flow and otherwise mitigate the issue.

This comes after BNSF sued Cicero in U.S. District Court in June, saying the city’s new sewer-rate ordinance requires railroads, and only railroads, to pay a $350 per acre charge for sewer use, leading the railroad’s sewer bills to increase by 1,250%, from $6,643 to $90,300 per month. Other commercial and industrial users, the railroad says, are charged on actual water usage. BNSF contends the Cicero ordinance violates several federal laws, including one forbidding a state or local tax that “discriminates against a rail carrier.” It is asking for an injunction preventing enforcement of the rate increase and a judgment declaring the order invalid.

The Cook County Record reports BNSF says it never received notice of the new rate, learning only of it when it received the first bill in February. When it contacted the city, the railroad says Cicero said there was no provision to dispute the bill and threatened to shut off the railroad’s sewer connections in 60 days. In May, the city invoiced BNSF for a $395,450 sewer bill and said the railroad would have to vacate the yard if the sewage was shut off. BNSF then filed suit, saying the city was threatening its ability to continue operation.

“BNSF believes it is discriminatory and unlawful for the Town of Cicero’s new stormwater ordinance to only apply to railroads and result in an unreasonably higher fee,” the railroad said in a statement to Trains News Wire. “We continue to be willing to negotiate with the Town despite their unwillingness to engage in dialogue to find a workable resolution.”

Cicero’s filing in response to the BNSF suit raised the flooding issues that became part of its lawsuit. It also claimed no hearing on the increase was necessary because the rate increase “is a matter within the sole discretion of the Town,” and that it did place the ordinance on its agenda to provide the opportunity for comment. BNSF’s filing contends the notice provided no description of the ordinance.

Town President Larry Dominick told the website Suburban Chicagoland that the city’s suit was unavoidable because the railroad has never attempted to discuss the issue with the town, which is also concerned about the possibility of hazardous materials in the stormwater runoff.