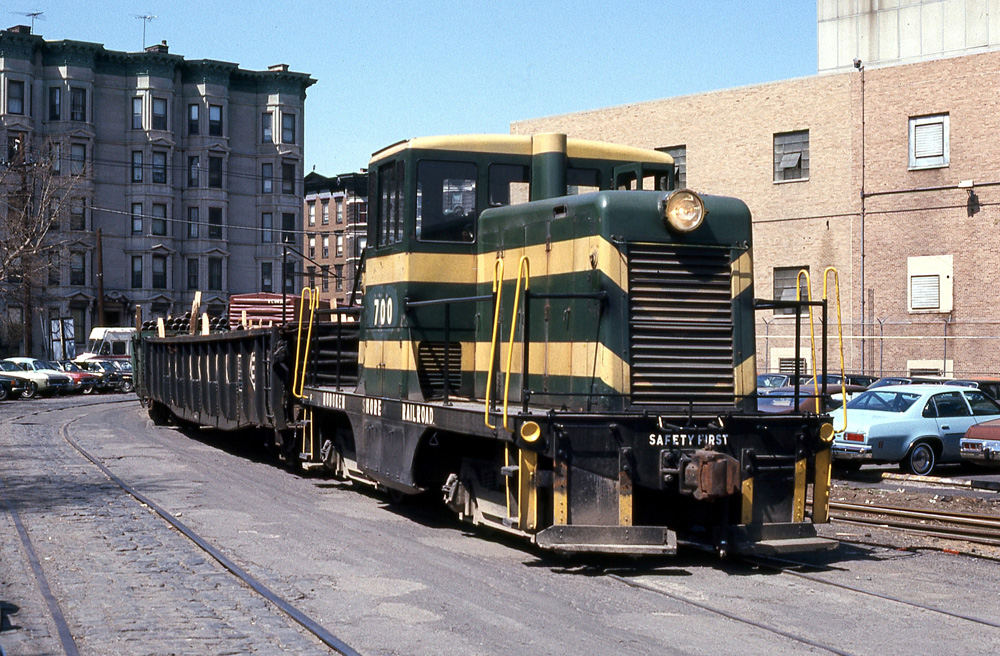 Both locomotives were built in Erie, Pa., in 1947. Middletown & New Jersey No. 2 was originally built as American Cyanamid No. 5 and worked at the company’s Calco Chemical Division in Bridgewater, N.J.. In 1963, the engine was acquired secondhand by the Middletown & New Jersey Railroad; from 1981 to 2007 it was the railroad’s sole operating locomotive. When the M&NJ was acquired by holding company Regional Rail, LLC in 2009, No. 2 was sent to a contract switching operations in Manheim, Pa.

Hoboken Manufacturers Railroad No. 700 was built for a 1½-mile line on the Hoboken, N.J., waterfront featuring tight curves and street running. Delivered in Stevens Institute of Technology colors — red and grey — to signify the railroad’s connection to Hoboken’s founding family, it was later repainted into a green and yellow scheme it wore for the railroad and its successor, the Hoboken Shore Railroad, until the latter railroad closed in 1976. It passed through multiple owners before arriving at the Tyburn Railroad in Morrisville, Pa.,; that railroad was acquired by Regional Rail in 2011.

Regional Rail, headquartered in Kennett Square, Pa, recognized the historic and regional significance of the No. 2 and No. 700 and reached out to Operation Toy Train of New York and the Tri-State Railway Historical Society to pass them both into preservation upon their retirement. The sale price for both locomotives, which graciously included a supply of spare parts, was not disclosed.

M&NJ No. 2 will join the display of Operation Toy Train of New York’s rail equipment at the new Port Jervis Transportation History Center in Port Jervis, N.Y., while HMRR No. 700 will be added to the Tri- State Railway Historical Society’s railroad collection at the United Railroad Historical Society of New Jersey’s restoration and storage facility in Boonton, N.J.. Both engines are slated for full mechanical and cosmetic restorations.

The two organizations’ joint campaign, called Operation 88, seeks $15,000 to complete the project. These funds will be used to cover the remaining transportation costs, mechanical upgrades, and repainting the locomotives into their historic liveries. Funding for the acquisition and initial transportation costs was secured from Liberty Historic Railway, Inc., a New Jersey-based non-profit that has funded numerous preservation efforts in years past, as well as contributions from private donors. To learn more about the project and to donate to the restorations of both locomotives, visit the Operation 88 website.