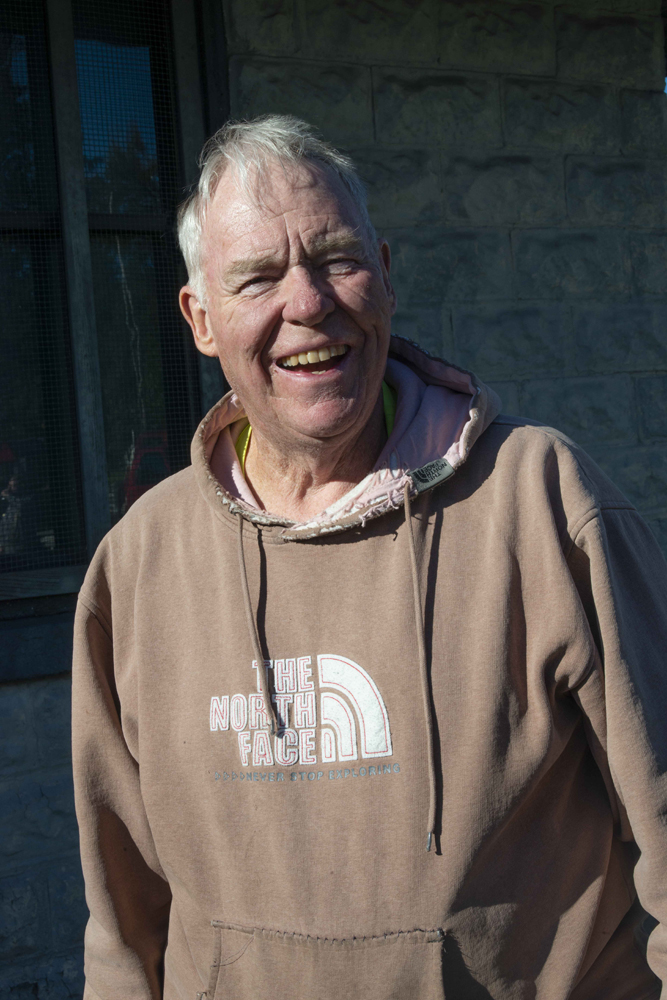 With that chant, Gene Tucker urged his four-man volunteer crew at the narrow gauge East Broad Top Railroad to squeeze a 60-pound rail into alignment just enough to slip a J-shaped “hook bar” into place to force the track gauge back to the proper 36 inches.

From Maryland to Utah and now central Pennsylvania, Tucker has put in his share of time getting intimate with pry bars, spike mauls, tie plates, and chain binders to heal what ails geriatric railroad track.

As a member of the nonprofit Friends of the East Broad Top, he helps oversee track restoration on the tourist railroad, a National Historic Landmark that since 2020 has been undergoing a revival by the EBT Foundation, Inc. after an eight-year slumber. With a 33-mile-long main line, the former coal, ore, and lumber carrier ran from 1874 to 1956, then a short portion of it made a remarkable 52-year run as a steam tourist line from 1960 to late 2011. The Foundation bought it to operate it as a nonprofit educational and historical enterprise.

The base on which all successful preservation railroads operate is sturdy track – roadbed, drainage, ties, rail. Tucker leads a team of volunteers — he has a pool of about 60 to draw from, out of the Friends’ 1,777 members — that works hand-in-hand with the Foundation’s three-member, full-time paid track crew.

“Gene is a critical member of our track team,” says James Roslund, EBT’s director of engineering. “Not only does he bring enthusiasm and pride in his work, but he lifts the enthusiasm of our paid employees. What he brings to this organization is priceless.”

Tucker is a 75-year-old grandfather of four, but at an age when many men are winding down, he shows no signs of slowing — either in his work at EBT or in his full-time job as parish priest of a 55-member congregation at St. John’s Episcopal Church in nearby Huntingdon. That explains the nickname his track crew has assigned him: “Friar Tuck.”

Ministry is a second career for Tucker, a vocalist who was a second tenor in the U.S. Army Chorus before retiring in 2002. While stationed in the Washington, D.C., area, he became involved with the Walkersville Southern tourist railroad near Frederick, Md. There, he led the first work party in 1991, repairing a 4-mile stretch of the former Pennsylvania Railroad Frederick Branch, which had been out of service for nearly 20 years following flood damage from Tropical Storm Agnes in 1972. It took two years to clear brush and five years to restore track to the federal Class 1 standard, the minimum at which passenger service is legal.

An Army tour of duty took him to a weeklong series of concerts in Utah, after which he spent some leave time volunteering to help with tie work at the National Park Service’s Golden Spike National Historical Park. Situated at Promontory Summit (Corrine, Utah), the park is the site of the completion of the first transcontinental railroad in 1869.

As a boy in Rising City, Neb., Tucker first encountered trains on a Union Pacific branch line. A Brill gas-electric car provided passenger service, but freight was pulled by steam locomotives, which “fascinated and terrified [me] at the same time,” he says.

“Track [work] eventually got to be my first love,” says Tucker. “I don’t know why. Maybe it’s because nobody else wanted to do it. It’s hard work and it’s a challenge and I’ve always loved a challenge.

“Conditions here [at EBT] are similar to what I’ve done elsewhere at museums and tourist railroads, and in consulting. Whether you’re working in 90-degree weather or 20-degree weather, you’re getting something done. It’s tangible; you can touch it.”

At EBT, priority of trackwork tasks is coordinated by Roslund and General Manager Brad Esposito. The blended full-time and volunteer crew restored and reopened the 4½-mile tourist-era main line from headquarters at Rockhill Furnace north to Colgate Grove and wye, rehabilitated track in the Rockhill yard, and has just started to reopen the 8 miles of line between Rockhill and Saltillo, which is the next-phase goal. It also replaced the ring rail in the turntable pit at the Rockhill roundhouse.

Jobs typically include gauging and spiking, and either tightening or replacing bolts holding the 33-foot-long sticks of rail together at joints. Friends volunteer John Quinn, a retired government computer engineer from Pine Grove Mills, Pa., explained that members “swap out on tasks,” spreading the more arduous physical work among retirees and “those of the younger persuasion.” And, he added, “we take serious breaks.”

Robertsdale lies nearly 20 miles south of Rockhill, connected by an overgrown main line featuring two tunnels and a 268-foot-long girder deck bridge, with grades exceeding 2%. The Foundation’s goal is to eventually return trains here, but in the meantime the Friends maintain the former EBT station and a museum in an adjacent two-story former railroad office building.

It’s open to the public on selected weekends, serving not only as a railroad and mining attraction in its own right, but also as a placeholder for the promise of trains returning someday. Over rails that haven’t seen a train since EBT ended common-carrier service in 1956, the Friends offer public handcar rides over a short stretch of minimally restored track.

On a recent day, Tucker was leading a crew of volunteers working south of Robertsdale. Besides Quinn, the group consisted of Kevin Conklin, Steve Jackson, Tom Perman, and Rick Rourke. Most are retired or nearly so.

A coach, not a boss

Tucker’s management style is closer to coaching than barking military orders, possibly an extension of his pastoral side. As the men grunted to edge a rail into gauge but didn’t quite nudge it far enough, he said, “Once more, with feeling, gentlemen,” a phrase that a band director or choir director might use during rehearsal.

Pete Clarke, the Friends’ Robertsdale museum and restoration coordinator, had asked Tucker’s crew to lengthen the 800 feet of usable track to a half-mile. The crew did better than that, installing hook bars and metal ties to restore a 1¼-mile stretch that was open for handcar and speeder trips during the annual Friends of East Broad Top Reunion, held Oct.7-9.

The old crossties are rotted away, because the frugal EBT never bought treated ties. So the rails now weave from side to side wherever frost heaves and sun kinks have deposited them. Rail heads are marked with notations on gauge — 38½ inches in one spot, 41 inches in another. The hook bars and metal ties, Tucker says, maintain gauge as a short-term fix, but in the long run do nothing to enhance the rails’ ability to hold weight. This was a common band-aid measure during the last days of the original EBT, he says. Robust ballast and relay or new ties are needed before regular trains can run.

As crew members worked southward toward Woodvale, 2 miles from Robertsdale and the end of Foundation ownership, they encountered a 20-foot-long washout that left the rails hanging in mid-air. No problem — using lumber, they built a supporting temporary bridge, good enough for now.

The main line, Tucker notes, is laid with rail ranging from 60 pounds per yard to 115 pounds, with the oldest piece they’ve found marked 1887. When EBT upgraded its track in the 1920s, Roslund says, it did so with secondhand 85-pound rail bought from the PRR, which was itself upgrading to 130- and even 152-pound rail. Sections of former PRR 85-pound rail can still be found at EBT, identifiable by the presence of bond wire plugs that were necessary to conduct current for block-signal protection, something unneeded on EBT.

Tucker is grateful for the chance to help at EBT. “This is a once-in-a-lifetime opportunity to be involved in a rebirth,” he says, “because of what it is — intact, with the original engines, original rolling stock, and shops.”

3 thoughts on “‘Friar Tuck’ and the East Broad Top”