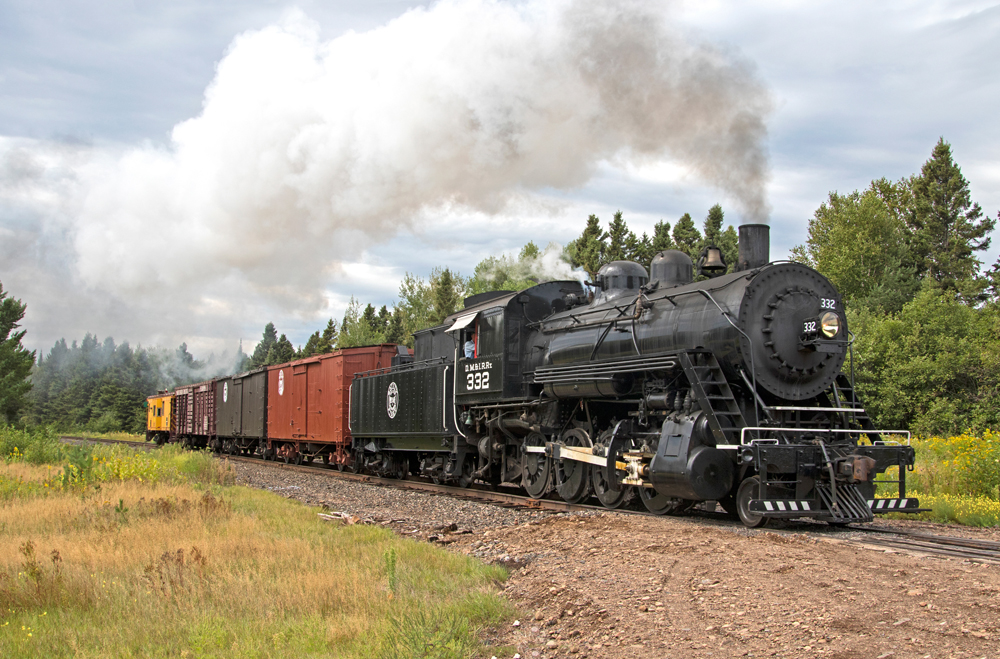 DULUTH, Minn. — After a two-year hiatus due to COVID-19 and necessary repairs, the Federal Railroad Administration has approved the return to service of the Lake Superior Railroad Museum’s Duluth, Missabe & Iron Range Railway 2-8-0 No. 332. The locomotive was fired up this week and inspected, including setting its three sets of safety valves.

No. 332 last operated in 2019; plans to operate it in 2020 were abandoned due to the COVID-19 pandemic. Inspections to return the locomotive to service in 2021 led to the discovery of cracks near the mud ring in the firebox, LSRM Executive Director Ken Buehler told Trains News Wire. Over the years the locomotive operated on the Duluth & Northeastern Railroad (1955-1964), four cracks developed that were repeatedly welded by D&NE mechanics. An FRA inspection in spring 2021 revealed the cracks had reopened. An inspection in conjunction with Fraser Shipyards of Superior, Wis., which has years of experience working with steam boilers, revealed the metal around the cracks was metallurgically sound. Fraser proposed the cracks be welded shut and new metal be welded over the cracks, a plan the FRA approved. In the fall of 2021, the welding and patching was completed and the engine passed its hydrostatic boiler test. It was then placed in the museum for display over the winter.

This year the FRA performed three inspections on the locomotive, including the test this week under steam. With inspections now complete, the stage is set for operations in 2022. Buehler said next up is training and test runs, since the 21 volunteers on the steam crew haven’t been able to operate the engine in two years. The museum hopes to announce an operating schedule in July. If all goes well steam operations likely will take place in late August and September.

American Locomotive Co.’s Pittsburgh Works built the locomotive in 1906 for the Duluth, Missabe & Northern as No. 332. It was operated by DM&N successor Duluth, Missabe & Iron Range Railway as No. 332 until 1955, when it was sold to short line Duluth & Northeastern and renumbered 28. The locomotive remained in service on D&NE until 1964. It was donated to the museum in 1974 and was returned to service in 2017. In 2019 it was restored to its DM&IR appearance and renumbered back to DM&IR 332.