The Siemens-built unit will travel east on regular Amtrak trains 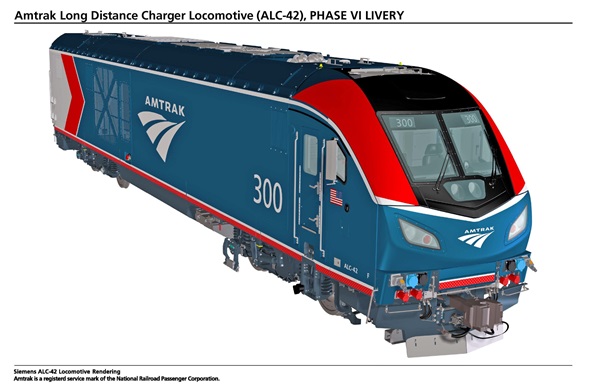 SACRAMENTO, Calif. – Siemens is putting the finishing touches on Amtrak’s first ALC-42 locomotive, with its departure scheduled for this weekend. The first locomotive, AMTK No. 300, will be hauled in the consist of Amtrak’s California Zephyr departing Emeryville on June 12, a source close to the railroad tells Trains News Wire. After arriving in Chicago on Monday the unit will be set out for a media even scheduled on Tuesday at Amtrak’s facility just south of downtown. The unit is then scheduled to continue east from Chicago on the Capitol Limited departing June 16.

Amtrak is expected to begin receiving a handful of ALC-42s soon to begin testing the locomotives, then regular deliveries are expected to start in the second half of 2021. The 75-unit order of the 4,200-hp ALC-42s should finish in 2024. The Siemens Charger locomotives are largely like the existing locomotives Siemens has produced for other customers across North America and feature the Cummins QSK95 engine and A.C. traction, though they will have larger fuel tanks and more Head End Power capacity to fit Amtrak’s needs.