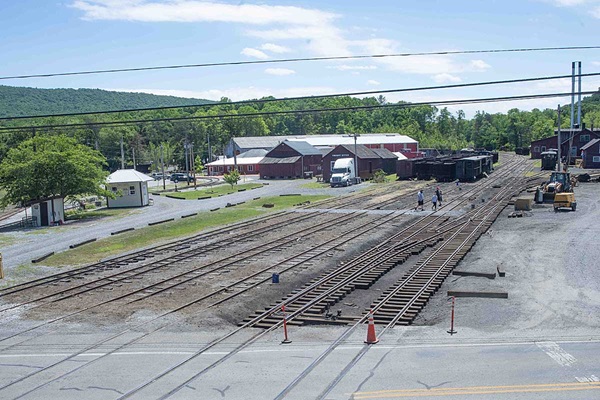 The reopening of the National Historic Landmark coincides with the 260th anniversary of the founding of the town of Orbisonia and its twin borough, Rockhill Furnace, home to the company’s general offices, machine shops, and roundhouse. It also coincides with the 60th anniversary of the first reopening of the EBT on Aug. 13, 1960, when it began running public steam-train rides after a four-year hiatus following its official abandonment as a coal-hauling line in 1956.

The community’s Homecoming celebration will consist of a parade, handicraft and food vendors, and more. Local activities will be coordinated by the Orbisonia-Rockhill Furnace Volunteer Fire Company and the Orbisonia Lions Club. It was to commemorate the community’s bicentennial in 1960 that the railroad was reopened the first time.

East Broad Top ran tourist trains each summer and fall season from 1960 to 2011, when the owner, Joe Kovalchick, closed it in order to seek a secure, long-term future for the operation. It was his father, Nick Kovalchick, who saved the railroad from scrapping in 1956, even though the family was in the scrap business. Earlier this year, Joe Kovalchick sold the bulk of the property – 27 miles of main line plus the shops, yards, offices, six steam locomotives, and freight and passenger rolling stock – to the nonprofit EBT Foundation Inc. The foundation was organized to revive, restore, preserve, and operate the railroad.

For the August event, EBT will operate open cars pulled by a diesel switcher. Two Baldwin 2-8-2 steam locomotives are under repair, Nos. 14 (built 1912) and 16 (built 1916), with an eye toward steaming them up for the 2021 season. Other historic EBT equipment will be on display during the three-day celebration.

EBT Foundation Inc., will sell joint tickets that include a train ride, tour of the shops and roundhouse, trolley ride at the adjacent Rockhill Trolley Museum, and ice cream. The railroad has announced that tickets are expected to go on sale Monday, June 22 at the website eastbroadtop.com. With reserved tickets, the number of people on the property at any given time will be limited in deference to COVID-19 pandemic and public health considerations. In addition, EBT plans to regularly clean and sanitize its cars and bathrooms.

Kovalchick family members expected to attend the event include Joe Kovalchick and his wife Judy, and Joe’s sister Millie. As a young girl, Millie dedicated the first train in 1960, and EBT engine No. 12 (Baldwin 1911) is named after her.

Since the sale to the EBT Foundation Inc., in February, the railroad has stabilized buildings, begun the overhaul of equipment, cut brush, and rebuilt track, all in conjunction with volunteers from the Friends of the East Broad Top. The group has held two official work weekends, one in March and one this month, to provide significant help to the foundation’s staff.

For more information, go to eastbroadtop.com.