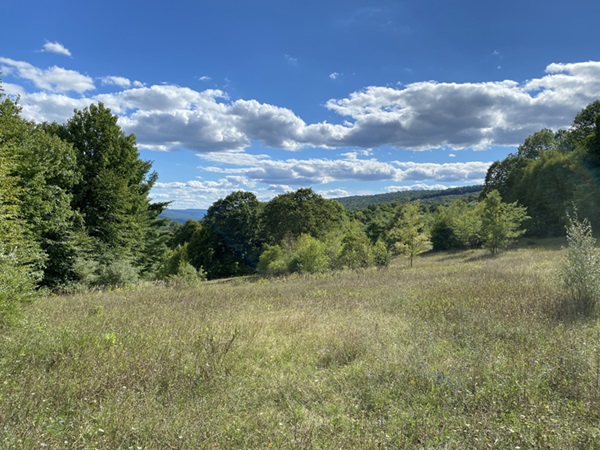 ROCKHILL FURNACE, Pa. — The nonprofit organization that now owns the East Broad Top Railroad is considering rebuilding a mountainous branch line that’s been inactive since the 1940s, a move that would provide spectacular ridgetop vistas and increase the number of destinations available to visitors.

The nonprofit EBT Foundation, Inc., owner of the historic narrow-gauge line in south-central Pennsylvania, is considering revival of a 2.5-mile-long branch known variously as the Coles Valley Branch, Midvalley Branch, or Joller Branch, Joller being the postal designation for the former mining community at the top of Wrays Hill. Perched at an altitude of 1,600 feet, the town was named for the first and last letters of the name of a mining operator there, John Miller. Both deep and strip mining eventually played out, and reclamation projects have erased most of the evidence of structures that once stood on the site.

The foundation is currently working to restore the tourist-era portion of the main line about 4 miles north of its headquarters at Rockhill Furnace (elevation 630 feet), to a wye and picnic area at Colgate Grove, but the more scenic part of the line lies in the mountains south of there.

Foundation Chairman Henry Posner III revealed the Joller proposal during a Friends of the East Broad Top virtual reunion a few weeks ago. This is the first time plans have been discussed that involved a location other than along the 32-mile-long main line of the EBT. The foundation owns the southernmost 27 miles of the main.

The foundation board hopes eventually to reopen the line to its southern end at Robertsdale/Woodvale as it was when the railroad ceased common-carrier operation in 1956. To that end, the railroad has relocated three EBT steel hopper cars to Robertsdale to signify its interest. But Posner believes that offering multiple rides and destinations increases interest and opens opportunities for greater tourism investment.

He cited the Harz Mountain narrow-gauge railroad in central Germany as an example where tourists engage in multiple-day stays, spending money in hotels and restaurants. “The East Broad Top can be a driver of tourism that is good not just for the towns but for the region,” he said. “We want to appeal to as broad a range of people as possible, to give people a reason to stay and boost the local economy.”

“When Henry mentioned Joller, there was a great deal of enthusiasm from the Friends of The East Broad Top,” said EBT Communications Manager Lawrence Biemiller. The 1,300-member, nonprofit Friends group has been instrumental in restoring buildings and rolling stock, a role for which Biemiller described the railroad as “deeply grateful.” The Friends group maintains the Robertsdale station and recently announced an $86,000 grant to the foundation to restore the carpenter’s shop that is part of the historic Rockhill Furnace shops complex.

The Foundation is still shaping its Master Plan, which includes numerous options without timelines, all of which will depend on funding. Joller is a possibility as an interim destination before restoring the railroad all the way to Robertsdale/Woodvale because of the condition of the Wrays Hill Tunnel, one of two mainline tunnels that would require work to clear. Foundation General Manager Brad Esposito said the other tunnel, Sideling Hill Tunnel, would require “moderate” work to reopen, but Wrays Hill would take “extensive” work. The Coles Valley Branch leaves the main line at a point between the two tunnels, just south of East Broad Top’s own version of Horseshoe Curve.

Thus, the railroad could, if funding allowed, reopen its main line southward from Rockhill Furnace to Joller via the less-difficult-to-restore Sideling Hill Tunnel. Reopening Wrays Hill Tunnel and extending operations to Robertsdale/Woodvale could be a longer-term project.

When the foundation board began looking at options, Esposito noted the railroad still owned the Coles Valley Branch right-of-way “in fee simple,” though the track had been removed in the 1950s. That is not the case with other former EBT branches, such as much of the Shade Gap Branch, where abandonment allowed landholders to reclaim the property from easements granted by the original owners.

Esposito said the foundation has conducted preliminary engineering inspections of all bridges and tunnels, including the largest span on the line, the 275-foot-long Pogue Bridge 3 miles south of Rockhill Furnace. The bridge inspections turned out much better than expected, he said, meaning that reopening the line and rebuilding the Coles Valley Branch becomes feasible, given enough money to pay for it.