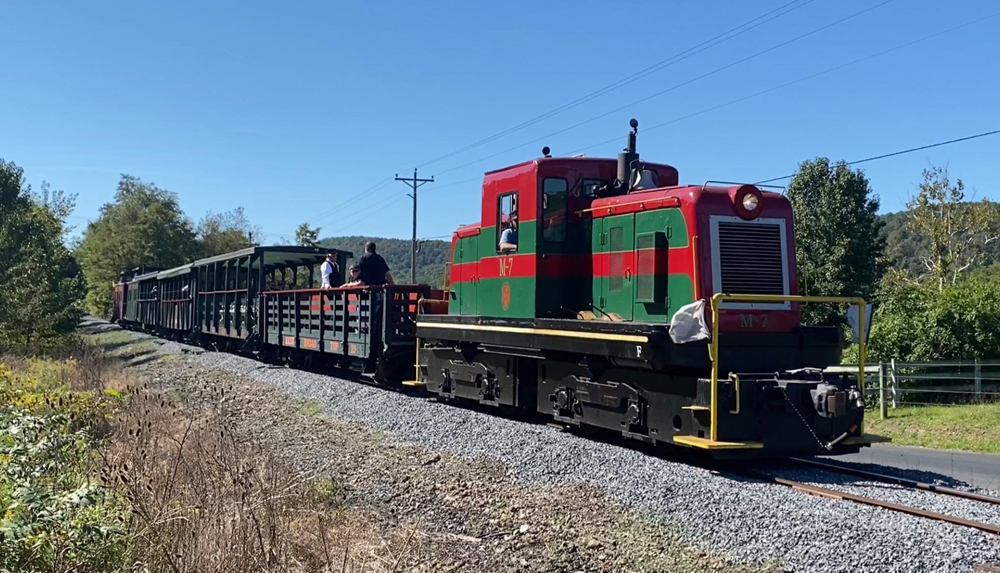 ROCKHILL FURNACE, Pa. — Almost two years into its revival, the East Broad Top’s return is moving forward at a rapid pace, with thousands of new crossties, work on the historic shop complex, and, progress on steam locomotive restoration.

In February 2020, the famed narrow gauge railroad was sold to the newly formed EBT Foundation. The railroad last operated in 2011, and the foundation started work immediately on returning the property to its former glory. In August 2020, the East Broad Top officially came back to life with the return of diesel-powered passenger excursions.

That weekend saw excursions operating over just under 1 mile of trackage to Enyeart Road. Since then, things have been progressing rapidly. Starting in May 2021, the railroad brought back a regular schedule of passenger excursions. In a September visit, we talked with Director of Sales and Marketing Jonathan Smith, and received a glimpse of future plans.

One of the focal points has been getting the track back in shape. More than 10,000 ties have been replaced, and regular excursions are now operating to the Runk Road fill, about 2.5 miles from Rockhill Furnace. The railroad has also purchased a standard-gauge tamper and converted it to narrow gauge to help with trackwork.

The second big push is the shop complex in Rockhill Furnace, one of the most complete steam-era shops in the country. Regular guided tours of the machine shops are happening every day trains run, and the restored line shafts in the main building are again in operation. Compressed air powers the shop steam engines.

Behind the scenes, the emphasis has been on stabilizing the shops complex. The entire shop complex sits on a marsh and over the years, the shops were sinking into the ground, as much as 3 feet in some places. As of September 2021, the EBT is working with Woodford Bros. Inc of New York. The company has restored almost every building in the yard to a level footing. Says General Manager Brad Esposito, “It takes a lot of effort to make it look like nothing happened.” To show the scope of work, the most recent project is the storehouse. Through work from the Friends of the EBT, almost 15 tons of parts from the building were catalogued and stored in boxes. The parts are now being returned to their original place in the now-stabilized building.

With a golden spike ceremony on Sept. 16, a train returned for the first time since 2011 to the wye and picnic shelter at Colgate Grove, the long-time terminus of the tourist railroad. The hope is for regular passenger trains to begin operating to Colgate Grove by the end of 2021.

The railroad has also partnered with the neighboring Rockhill Trolley Museum for combination tickets to the railroad, the shops, and a trolley ride. The EBT will operate through October and will be operating Christmas trains in 2021.

In the coming years, the operable track for excursions will be expanded, and steam will return. Crews working in the roundhouse are busy getting EBT 2-8-2 No. 16 restored to operable condition. No. 16 last steamed in 1956, and never operated during the tourist era. Named “Nick” in honor of Nick Kovalchick, who saved the railroad in 1956, No. 16 will be the first of the five steam locomotives on the property to return to service.

Those interested in getting involved can join the Friends of the East Broad Top at www.febt.org