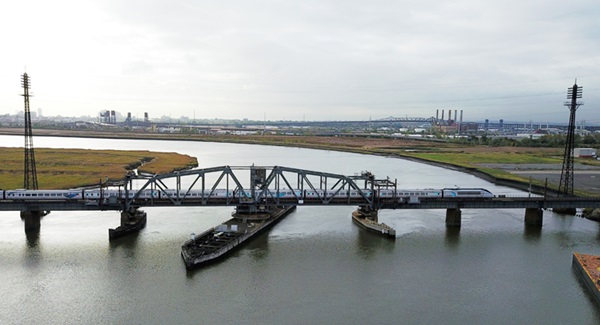 NJ Transit approves agreement to replace Portal Bridge, Northeast Corridor trouble spot
An agreement to replace New Jersey’s infamous Portal Bridge on the Northeast Corridor is finally in place. NJ.com reports that the NJ Transit board of directors has unanimously approved an agreement with Amtrak, owner of the bridge, to replace the 110-year-old swing bridge over the Hackensack River between Kearny and Secaucus, N.J. Monday’s agreement could mean a groundbreaking next spring for the replacement project, described in detail here. The unreliability of the bridge, which sometimes fails to lock back into place after it is opened, has often led to delays for NJ Transit and Amtrak passengers. The problems led to a tongue-in-cheek GoFundMe campaign for a replacement [see “GoFundMe campaign wants to replace Portal Bridge,” Trains News Wire, Nov. 30, 2018], limits on when the bridge could be opened [see “Coast Guard to make permanent ban on rush-hour openings of Portal Bridge,” Trains News Wire, Oct. 2, 2019], and finally, an agreement for Federal Transit Administration funds that helped make Monday’s agreement possible [see “Portal Bridge project advances to engineering phase, gets federal funding,” News Wire Digest, June 22, 2020].