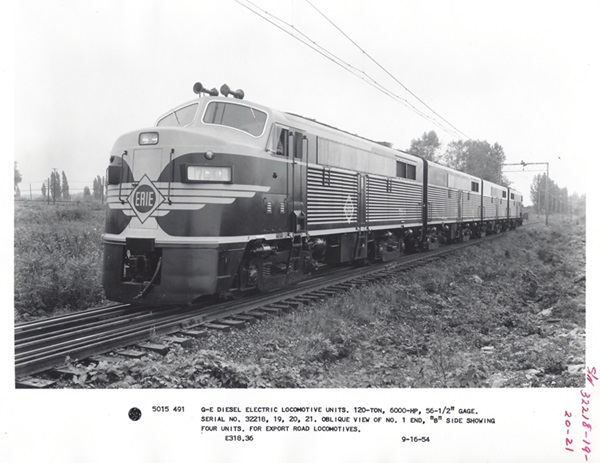 Diesel engine from GE test locomotive declared a mechanical engineering landmark
A prototype diesel engine built for use in a General Electric test locomotive has been declared an Historic Mechanical Engineering Landmark by the American Society of Mechanical Engineers’ National History & Heritage Committee. The 1,200-hp Cooper-Bessemer FVAL8T engine is the sole survivor of four used in GE’s A-B-B-A test locomotive No. 750, which operated on the Erie Railroad from 1954 to 1957. One A and B unit had the FVAL8T, while the other two units had 1,600-hp FVAL12T engines. The tests confirmed the engine was suitable for use in GE’s entry into the domestic locomotive market, becoming the GE 7FDL engine with the introduction of the U25B. The preserved engine was returned to Cooper-Bessemer after the test locomotive concluded operations and was used to run an air compressor at a Mount Vernon, Ohio, factory for several decades before being acquired by the Lake Shore Railway Historical Society in North East, Pa., near Erie, which specializes in rolling stock and artifacts related to GE locomotive production. The engine is current stored by the society and not on public view, with hopes of receiving public donations to place it on display sometime in 2021. Still to come is an official declaration of the engine’s status, along with a bronze plaque denoting the status and a citation on the AMSE’s historical landmark web page.

Lake Superior & Mississippi cancels 2020 operations
Duluth’s Lake Superior & Mississippi Railroad, which had still hoped to operate some tourist trains this fall, has cancelled its 2020 season. The Duluth News Tribune reports the board of the all-volunteer operation made the decision to cancel all operations, citing difficulties in complying with COVID-19 safety measures and safety of the volunteer staff. The railroad continues to work on maintenance and equipment restoration in preparation for the 2021 season. Visit the railroad website for more information.
You must login to submit a comment
Related Articles