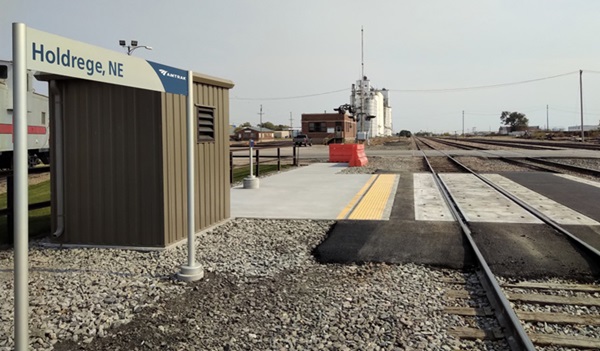 Amtrak completes new platform, will resume stops in Holdrege, Neb.
Amtrak’s California Zephyr will again stop in Holdrege, Neb., after an absence of several months after completion of a new station platform in the community. KHGI-TV reports that after the passenger railroad could no longer reach agreement with the owner of the 1910 Burlington station, it built its new platform 63 yards to the east. Shane Westcott, who saved the building and converted most of it to office space, told the TV station Amtrak did not renew over ADA accessibility issues. Spokesman Marc Magliari said Amtrak will extend the new platform and end up spending about $2 million on the platform, lighting, shelter, and parking. The Zephyr last stopped in Holdrege in July but is scheduled to resume stops next week. Holdrege served about 1,800 passengers in 2019.

SMART refinances debt, will be on ‘solid ground’ financially
The Sonoma-Marin Area Rail Transit board has approved a plan to issue up to $160 million in bonds to refinance its construction debt, a move that could save the agency more than $3 million a year in debt payments. The Marin Independent Journal reports chief financial officer Erin McGrath told the board the move, along with recent budget cuts and reductions in service, would keep the agency on “very solid ground” until its current sales tax funding expires in 2029. A move to extend the sales tax by 30 years and extend its debt payments to 2059 was rejected by voters earlier this year [see “News Wire Digest for Thursday, March 5.”]

British rail travel drops to lowest level since mid-1850s because of pandemic
It’s not just the United States where rail travel has taken a beating because of the COVID-19 pandemic. If anything, things are worse in Britian. The UK’s Office of Rail and Road reports that between April and June, during the nation’s coronavirus lockdown, there were 35 million rail trips, just 8% of the total for the same period in 2019 — and the lowest usage in about 170 years, which website The Railway Hub notes would have been only about 20 years after the beginning of scheduled rail travel.