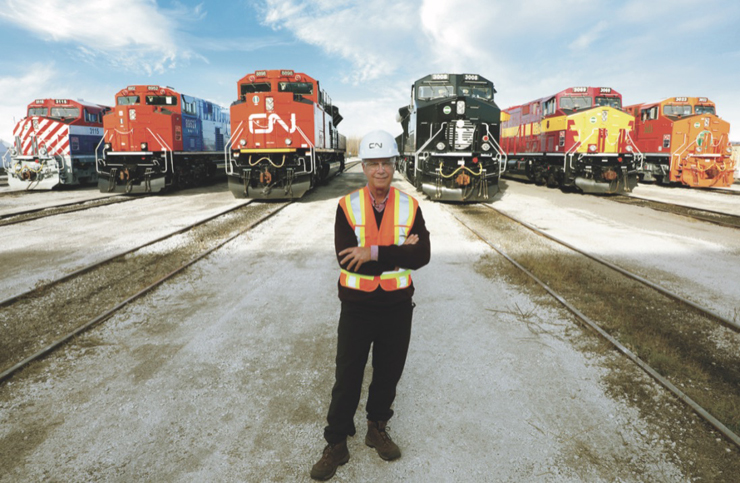 MONTREAL — Canadian National has unveiled a set of heritage locomotives as it celebrates today’s 25th anniversary of the initial public offering that marks its privatization from a government-owned Crown Corporation.

In its 25 years as a private corporation, CN has acquired the Illinois Central; Wisconsin Central; Elgin, Joliet & Eastern; and BC Rail. Those railroads, as well as CN component Grand Trunk Western, are represented with the specially painted locomotives commemorating the anniversary of the IPO.

At C$2.25 billion, the Nov. 17, 1995, IPO was the biggest in Canadian history. JJ Ruest, CN’s CEO, will mark the anniversary today by ringing the Opening Bell at the Toronto Stock Exchange and the Closing Bell at the New York Stock Exchange. Today, the railroad has a market capitalization of approximately C$100 billion; a C$1,000 investment in 1995 would be worth more than C$63,000 today.

“The privatization of CN was anticipated with widespread skepticism, but executed with startling success and today it is the source of enormous pride for our employees and all those involved over the years,” Ruest said in a press release. “It allowed CN to unleash the powerful creative and competitive forces of our railroaders. I want to thank everyone who contributed to this success as well as our employees for their dedication to safely moving the economy for our customers and for the communities where we operate. Twenty-five years after the IPO and with safety as our core value, our future is all about performance and customer service, generating long-term value for our shareholders. It’s been an amazing 25 years and the journey continues.”