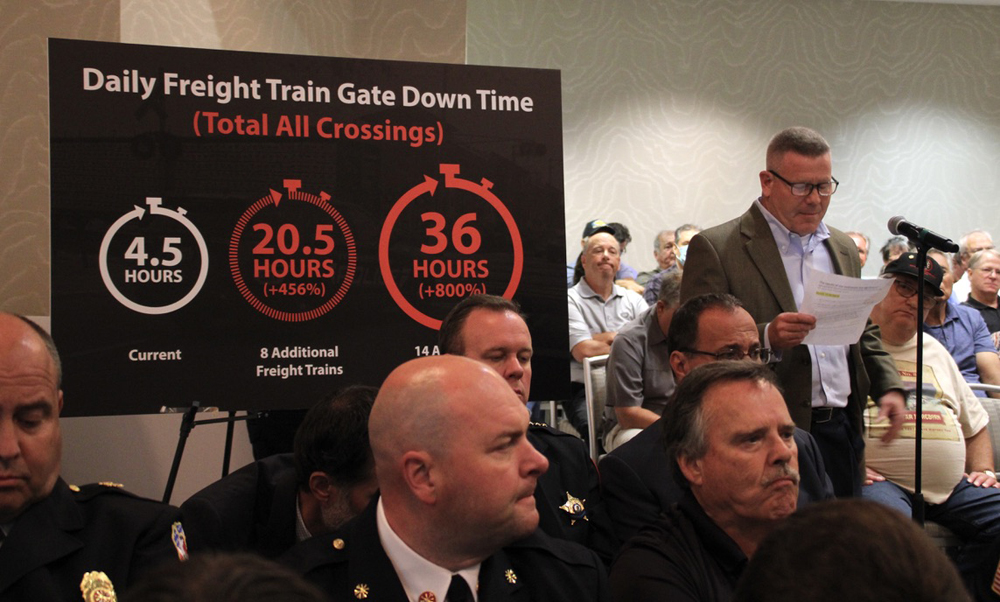 ITASCA, Ill. — Given the location of the event —in the heart of the cluster of Chicago suburbs who have organized to fight the Canadian Pacific-Kansas City Southern merger — it is little surprise that Monday’s public meeting on the merger’s draft Environmental Impact Statement was a prolonged attack on that report, and on the merger itself.

The meeting organized by the Surface Transportation Board’s Office of Environmental Analysis drew a crowd that filled a ballroom at an Itasca hotel, as well as STB chairman Martin Oberman and member Michelle Schultz. The turnout was such that the meeting, scheduled to conclude at 8 p.m., was extended by 90 minutes to allow more people their turn at 3-minute public comments. Some of them even stayed within that time allotment.

If there was a surprise, it was late in the three-hour public comment session, when a representative of Canadian National took the opportunity to say “pervasive issues with the accuracy” of CP and KCS data presented to the Surface Transportation Board meant that data “is not a reliable basis for the board to assess the environmental impacts of the proposed merger.”

“CN has given multiple examples of line segments where the CP and KCS numbers inaccurately reflect traffic on the line,” said Kari Harris, CN’s US-based regional manager of environmental impact. “Without accurate and reliable data, [the STB’s Office of Environmental Analysis] cannot determine whether and where relevant thresholds for significant environmental impacts may be triggered.”

That threshold is an increase of eight trains per day, less in some cases to consider air pollution impacts; it actually is not at issue in the Chicago suburbs, where the CP-KCS merger application projects an eight-train increase on the line CP shares with Metra’s Milwaukee West operation.

But much of the well-organized and detailed, if at times repetitive, expression of safety concerns raised by coalition members emphasized a fundamental disagreement with the CP-KCS estimate, focusing instead on an alternate figure of an additional 14 trains per day.

No matter the number, the testimony by police chiefs, fire chiefs, mayors and other city officials of the eight coalition communities, along with state legislators and U.S. Rep. Raja Krishanamoorthi, returned repeatedly to the increase in emergency response times that would come from increased freight traffic in communities that are largely bisected by the rail line. They argued that the failure to consider that issue belied the draft report’s conclusion that,  other than some noise issues, impacts of the merger would generally be “negligible, minor, and/or temporary” [see “STB draft review finds little environmental impact …,” Trains News Wire, Aug. 5, 2022].

The police and fire chiefs argued that the additional trains would split their communities in two, blocking every grade crossing in some of the smaller towns, and make it impossible for officers and firefighters to respond in a timely fashion from stations on one side of the tracks to emergency calls from stations on the other side  (Several of the fire officials cited a statistic that a fire can double in size in a minute to argue a 2- or 3-minute delay for a fire truck at a grade crossing could be catastrophic. They argued that CP, not the communities, should bear the financial cost of mitigating this problem, be it through grade-crossing separations, funding new facilities that would provide police or fire protection on both sides of the tracks, or other measures.

“This impact was created was created by CP and should be resolved by CP at their expense to convey good faith and repair previous and future damages to the entire community,” said Bensenville Fire Protection District Chief Doug Halvorson, in a theme heard throughout the evening. “… As the railway is the only establishment that stands to profit significantly, they should render the capital to make appropriate changes for a safer Bensenville.”

The draft report’s conclusion that major grade crossings studied would see an average delay of only 0.7 seconds per vehicle, compared to if no action occurred, was derided throughout the evening, on the grounds that the draft report was “a mischaracteriziation of actual impacts,” in the words of Chris Snyder, DuPage County director of transportation and county engineer. Snyder said a time-delay study commissioned by the coalition showed that, across the 30 grade crossings in the eight coalition communities, the additional traffic would bring an additional 20.5 to 36 hours of time with crossing gates down each day; an additional 15,000 to 23,000 vehicles blocked each days, and an additional 862 to 1,285 hours of time spent by vehicles waiting at those gates. Several other officials cited that study in addressing potential impacts in their communities.

William Benz, Metra chief ethics and special projects officer, also testified, and like CN’s Harris, called into question the CP data underlying the draft report. Benz said Metra’s traffic modeling showed the merger application “significantly understated the increase in traffic and degradation of Metra’s lines. This was not considered in the draft environmental impact statement, which only reviewed applicants’ assumptions of traffic increases and impacts. Metra urges the board to consider the impact indicated by Metra’s rail traffic modeling, which Metra submitted to the board.”

Monday’s meeting was the first of four such public comment sessions to address the environmental report. The next will be held tonight in Davenport, Iowa.