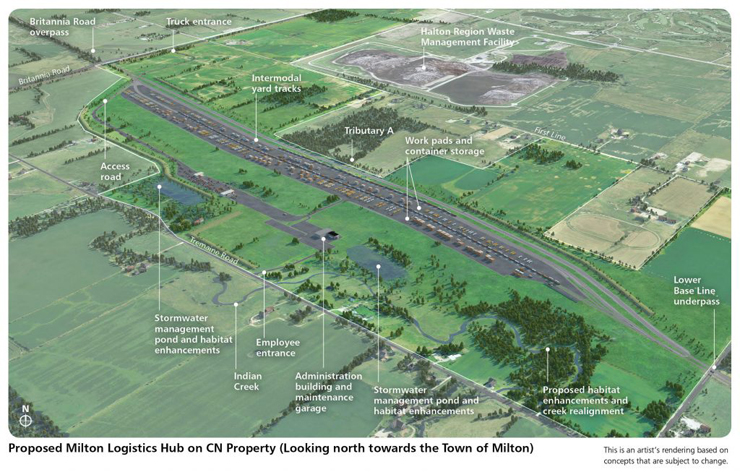 OTTAWA – Canadian environmental officials have given Canadian National a green light for the $250 million intermodal terminal it aims to build outside of Toronto.

The minister of environment and climate change last week announced the government’s decision to approve the Milton Logistics Hub, subject to 325 environmental conditions that would make it the most tightly regulated intermodal terminal in Canada.

Among the conditions: A cap on inbound truck movements. The terminal may average no more than 800 trucks per day each month, with no more than 880 trucks entering on any single day, according to the government’s decision statement.

CN proposed the Milton Logistics Hub in 2015 and requested federal approval for the project in 2016. The terminal plan ran into local opposition, with area mayors and residents citing noise, truck traffic, and environmental concerns.

CN said it was pleased with the approval of the terminal, which will give the railway the capacity it needs to grow in the Greater Toronto, which is home to nearly 7 million people and is the fastest-growing region in Canada.

“The Milton Logistics Hub is a much-needed addition to the Canadian supply chain to meet the growing demand goods into the Greater Toronto and Hamilton area, and can play a key part in Canada’s economic recovery and efforts to reduce [greenhouse gas] emissions,” CN said in a statement.

The railway pledged to work with local communities as the project moves forward.

CN currently operates three terminals in the Toronto area, all of which are operating at capacity. The Brampton Intermodal Terminal, the railway’s largest, is hemmed in by development.

The Milton terminal would initially handle four trains per day, CN has said, and would take two years to build after all approvals and permits are obtained.

The terminal is key to CN’s growth strategy, which includes tying the railway more closely to consumers through intermodal service.

CN is experiencing robust growth in international traffic through the British Columbia ports of Vancouver and Prince Rupert, and aims to expand imports through East Coast ports at Halifax, Nova Scotia, as well as a new deep-water intermodal terminal planned to open in Quebec City in 2024.