MONTREAL — Canadian National executives defended their intermodal growth strategy today, saying it’s the best way to compete with trucks and bring new profitable traffic to the railway over the next decade.

Activist investor TCI Fund Management, which has launched a proxy fight to replace CEO JJ Ruest and four board members, has been critical of CN’s operational and financial performance over the past five years, including its deteriorating operating ratio, or O.R.

A relatively high percentage of CN’s revenue comes from intermodal traffic, which has a higher operating ratio than carload or bulk traffic, says Ruest, who is retiring in January. “We have 30% of our revenue in the third quarter that came from intermodal, just like BN[SF]. As a reference point, on the low end you have CSX, who only had 15% of their revenue coming from intermodal,” he says. 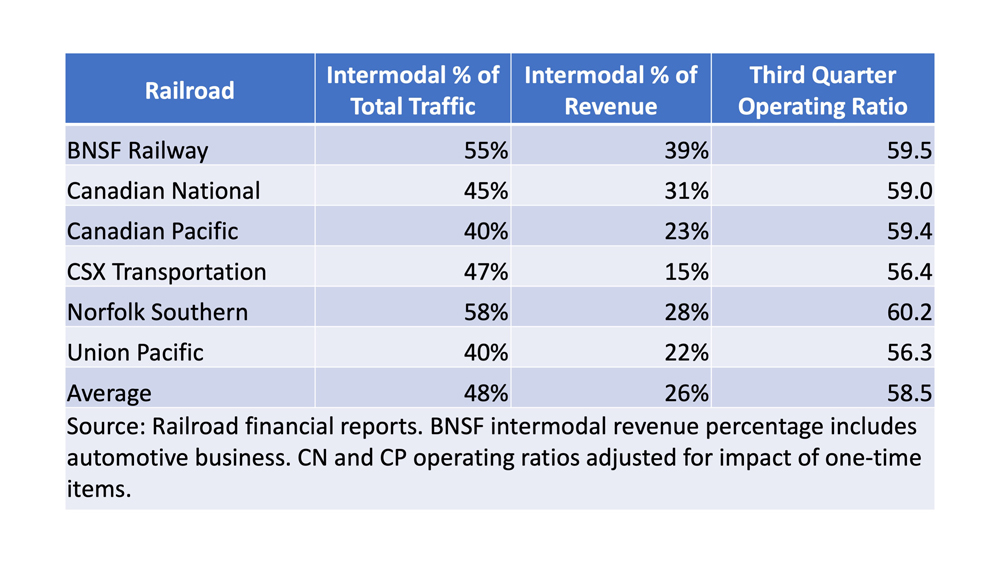 The future of railroad growth belongs to intermodal, Ruest contends.

But that’s no reason to pass up the opportunity to gain more intermodal traffic. “Intermodal is part of our growth story,” Ruest says.

CN set a 57% operating ratio target for next year as part of a plan to cut costs while boosting profits and earnings. Last year CN’s operating ratio, adjusted for one-time items, was 61.9%. The railway has completed layoffs and several other cost-cutting moves that were announced in September, Chief Financial Officer Ghislain Houle says.

CN says its Full Speed Ahead plan is designed to balance the needs of shippers, shareholders, employees, and the economy. “The operating ratio we define as how low should we go versus how low can we go,” Ruest says.

Chief Operating Officer Rob Reilly says CN’s key operating metrics have improved over the past couple of years and will continue to improve as the railway adopts more technology, from automated track and car inspection to more fuel efficient and alternative-fuel locomotives.