Owner says move was to free up shop space 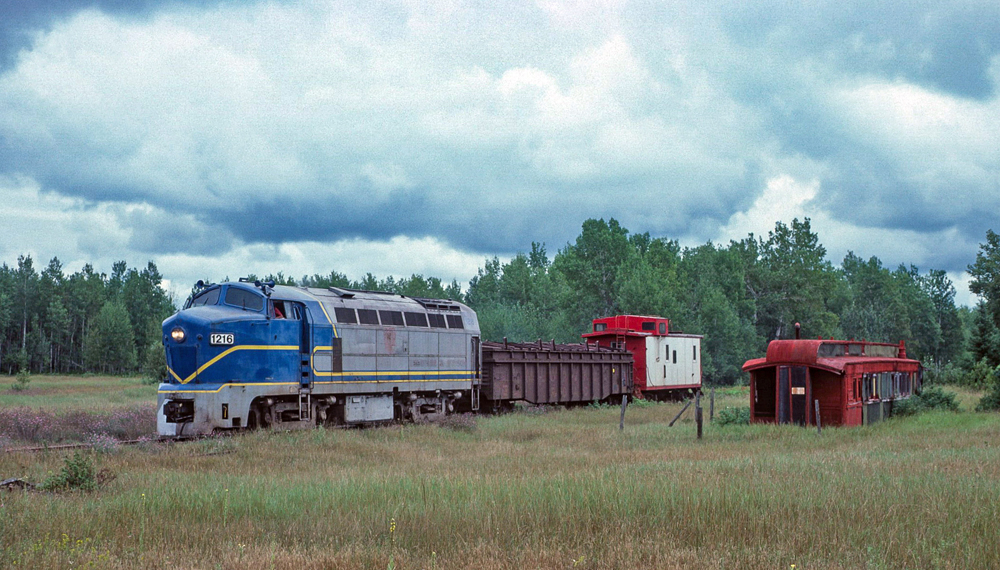 ESCANABA, Mich. — The railfan world was electrified yesterday when the Escanaba & Lake Superior Railroad was seen moving one of its two Baldwin RF16 “Sharknose” diesels from the E&LS car shop in Escanaba to another shop at the railroad’s headquarters in nearby Wells. Rumors flew this would be the beginning of an effort to restore Shark No. 1216 to service. Recently the railroad conducted an inspection of the unit, removing some of the side and radiator panels for inspection.

The reality is the locomotive was moved to free up space in the shop building. E&LS President John Larkin told Trains News Wire he had the unit moved to open space in the shop for covered hoppers to be cleaned. “We will be using track one and track two in the building washing off covered hoppers cars inside and outside; in so doing there will be water on the floor and we certainly don’t want to get the traction motors on the RF16 wet,” Larkin said.

E&LS runs a large and profitable car shop on the site of the former Harnischfeger Corp. crane plant in Escanaba. One of the buildings houses E&LS’ freight car rebuild facility, while another houses Larkin’s private collection of locomotives and passenger cars. Now part of the “passenger” shop will be used for the freight car business. So the Sharknose was moved out of the way to a heated shop in Wells, about a mile from the ex-Harnischfeger facility.

Larkin says he’d like to restore the locomotive some day and has the parts to do it, but acknowledged it would be a “tough project to do” that would involve a lot of time and expense. “In 1991, when Baldwin was getting out of the processes, I bought a number of items that could be used either for a Baldwin RS12 (which E&LS was using at the time) and/or an RF16. The problem was that even though we put the materials in storage, people would take a part out and use it to repair other Baldwin engines and by taking the parts out, we don’t know how many or what type are gone,” he said.

“I would hope that at some point to rebuild the 1216. The last time the late Fred Cave (former Baldwin Locomotive manager and mechanic) was here, we shot a 608A bedplate and put the crank in the bedplate with the proper tensioning so that at some point it may become economically feasible to rebuild an RF16. My main objective is to keep the locomotives out of harm’s way.”

Baldwin built 109 RF16 A units and 51 B units between 1950 and 1953 for Baltimore & Ohio, New York Central, and the Pennsylvania Railroad. In 1967 the Monongahela Railway purchased seven As and two Bs from NYC, and operated them into the 1970s. The last two As, Nos. 1205 and 1216, were in danger of scrapping until they were purchased by Delaware & Hudson in 1974. They were used in freight and passenger excursion service on the D&H until late 1978, when they were purchased by Illinois-based Castolite Corp. That company leased them to the now defunct Michigan Northern, and eventually they moved to E&LS.

No. 1216 was briefly used by E&LS in the summer of 1979; No. 1205 had mechanical issues and remained stored. No. 1216 saw another revival in autumn 1982, but after a few trips between the railroad’s headquarters in Wells and Channing the unit’s crankshaft broke and it has been stored ever since. Larkin acquired the units in the 1980s and has kept them in indoor storage ever since.