Home / News & Reviews / News Wire / Backdating the East Broad Top: how much is too much? 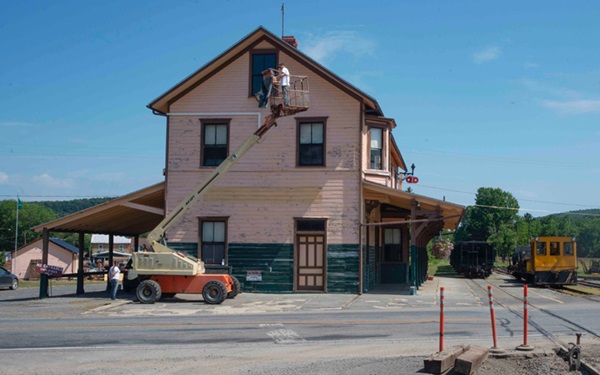 ROCKHILL FURNACE, Pa. — With rehabilitation and restoration of the East Broad Top Railroad under way, the EBT Foundation staff is beginning to deal with the issue of backdating. How far and how much should it change in order to give the property the appearance of its common-carrier days (1870s-1956)?

A recent trip through Rockhill Furnace revealed that large black-and-gold “Orbisonia Station” signs had been removed from the station and general offices for the building to be repainted. It later developed the signs are not going back up, as part of an effort to scrub the railroad of accretions from its 1960-2011 tourist era.

Changes made during that era include:

— White tires and rims and white running boards on the four Baldwin 2-8-2 steam engines that were made operable (out of a total of six), as well as brass boiler bands and red cab roofs. (Engine No. 15 was subsequently returned to its common-carrier appearance.)

— Gold lettering “Millie” on the cab sides of engine No. 12. As a young girl, Millie Kovalchick, daughter of then-EBT-owner Nick Kovalchick, dedicated No. 12 when the railroad reopened on Aug. 13, 1960, and the engine was named for her.

— Lettering and heralds on the sides of combines Nos. 14 and 15, which were miners’ coaches in common-carrier days and carried only numbers.

— Caboose No. 28, painted green to match the passenger consist. (Caboose No. 27 remains red for photo freights.)

— A yellow “Home of the East Broad Top Railroad” sign on the roof of the station’s passenger shelter.

Lawrence Biemiller, communications director for the foundation, says it appears backdating will be selective, with some elements of the tourist era retained and some aspects of the common-carrier days restored. It all speaks to the sensitive subject in restoration of how far to go.

“I don’t think we’re going back to white tires and running boards, or brass boiler bands,” Biemiller says, “except Brad [Esposito, the EBT’s general manager] wants to keep the 12 in its tourist-era paint. And I’m sure the name ‘Millie’ will stay, since the real Millie is returning Aug. 13 to help us celebrate the 60th anniversary of tourist service.

“It seems unlikely that the locomotives’ cab roofs will remain red, other than the 12’s. Brad says he like the red but it’s not authentic. He’s also [thinking of return[ing] the turntable to black paint” — it is currently red — “but I don’t know that there’s been a formal decision on that — or anything, for that matter.”

According to Esposito, the yellow “Home of” station sign will be returned to its common-carrier appearance with “General Offices, East Broad Top Railroad” lettering.
Biemiller continued: “I’m not sure how the cars will be lettered, or whether Caboose 28 will remain green. Personally. I like the paint job on the exterior of the parlor car, but I’d love to see the interior restored and the current law-office chairs replaced with recreations of the wicker originals. For that matter, I’d also like to see the wooden sidewalk reinstalled across the Meadow Street grade crossing in front of the station, and the wooden platform, but I doubt that will happen

“Authenticity is a troublesome and elusive goal at a place like the EBT. For one thing, the railroad in, say, 1900 would be almost unrecognizable to fans today — a road of through-truss bridges, wood hoppers, and Consolidations, with the engine yard and shops arranged much differently and no sign of the present station. I don’t see it as any more ‘right’ to pick some arbitrary year in the 1920s or 1940s as a restoration goal than to pick 1899.

“And frankly, it’s unauthentic for the parlor car to be seen at all, since usually it was tucked away in its own shed and brought out only for special occasions, when the common rabble would never have been allowed on board.

“As for other tourist-era changes, well, the EBT ran 83 years as a common carrier and then 53 years in its first tourist incarnation, which I think was as important to its survival as anything else. So wouldn’t erasing all evidence of the tourist years be its own crime against the historic record?”

So it will come down to case-by-case decisions, walking the slender line between honoring the near past and distant past. — Dan Cupper